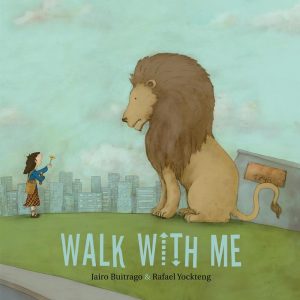 Walk with Me takes the reader through the complex reality of a girl whose father has gone missing in Colombia, leaving her to walk home by herself. But the girl is not alone. A lion keeps her company and, most importantly, keeps her safe, strong, and awake. They walk from the girl’s escuela, through busy streets that take them “out of the city”, to the guardería, where she must pick up her baby brother. Together, they enter la tienda and get all the groceries they need from the vendor who otherwise wouldn’t give them credit. Still together, lion, baby brother, and girl walk home, prepare a meal, set the table for four, and patiently “wait till Mama gets home from the factory”. Once Mama is home, the girl invites the lion to “go up into the hills again” until the girl calls him back.

The illustrations, sketched on paper, scanned and then redrawn and colored digitally, create a rich sociopolitical context with specific references to two historical incidents in Bogotá, Colombia. The first one appears on the cover of the English version. The year 1948 on the metal plaque on the pedestal references the assassination of Jorge Eliécer Gaitán, leader of the Liberal Party and presidential candidate, under the government of President Mariano Ospina Pérez. The assassination led to a series of massive riots named El Bogotazo which destroyed most of downtown Bogotá and was followed by a decade of intense violence known as La Violencia. The second historical event is introduced on the last double-page spread which depicts a night table, a family picture including Mama, Papa, baby brother and the girl, and a pile of newspapers highlighting the Spanish headline: “FAMILIAS DE DESAPARECIDOS EN 1985”. The newspaper article about families of missing individuals in 1985 references November 6, 1985 when the M-19 rebels took over Colombia’s Palace of Justice, leaving a hundred dead and over a dozen missing. More recent, La corte interamericana de derechos humanos (Interamerican Court of Human Rights) held the Colombian government and military responsible for the desaparición forzada, forced disappearance of individuals suspected of participating in the attack and/or somehow collaborating with the M-19 group. For over 30 years the families of the missing individuals have fought to find the truth about their loved ones.

This is a story about hope and resiliency that describes the daily responsibilities and sacrifices that a girl takes on in order to support her family’s survival. The walk home is long and presents challenges that encourage her to rethink and reimagine a safe space. Jairo Buitrago, Rafael Yockteng, and Elisa Amado have created a book full of symbolism and opportunities for multiple interpretations and further inquiry. For example, why did the child encourage the lion to return to the hills (a place where Colombian guerrillas have historically and consistently hid and trained?) If the lion is imaginary, why can everyone see it? Why is the child trying not to fall asleep? Is it so she can continue her daily chores or is it perhaps a deeper metaphor to continue fighting for her life, family, and country? Where is her father? What does it mean to be a rebel? A liberal? What does the lion represent? What is the role of creativity in coping with difficult times? How many children in Colombia walk alone? How many children in the United States walk alone? Why?

Walk with Me can be paired with other books by Jairo Buitrago, Rafael Yockteng, and Elisa Amado, such as Two White Rabbits (2015) and Jimmy, the Greatest (2012). It can be further paired with stories that explore children taking action in difficult times, such as John McCutcheon’s (2017) Flowers for Sarajevo, Kerascoët’s (2018) I Walk with Vanessa, and Antonio Skarmeta’s (2003) The Composition. A third potential pairing could include books about father-child relationships through uncommon storylines, such as Karen Hesse’s (2018) Night Job and Ross Watkins’ (2018) Dad’s Camera.

Jairo Buitrago is a Colombian author, illustrator, and movie researcher. He described his work as an alegoría política, a space with multiple symbolisms that welcomes fantasy while introducing young readers to reality sin tabúes ni prejuicios (González, 2013). To learn more about Buitrago’s art, visit http://jairo-buitrago.blogspot.com/.

Rafael Yockteng was born in Lima, Perú, and moved to Colombia at the age of four. He studied graphic design at the Jorge Tadeo Lozano University in Bogotá. His work and presentations can be followed on Facebook: Rafael Yockteng.

Additional Information about Walk with Me and “El Bogotazo”: