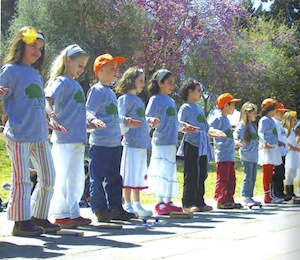 “I can’t wait to get back to a country where they speak English,” announced my exhausted eleven year old son, while we stood in line at El Al, the Israeli national airline, preparing to board our plane back home from Tel Aviv. This natural human desire to remain within familiar territory is an emotion I frequently experience along with Bryce. Spending days eating none of his favorite foods, navigating multiple hotels and historical sites, missing baseball tournaments… could cause angst for any pre-teen. Nonetheless his statement urges me to continue exploring the learning potential from our family vacation for years to come.

This week, I cautiously focus on unfamiliar territory that I will not understand as an outsider. Just as non-Americans do not comprehend our nation’s current turmoil with the educational testing mania or fracking dilemmas in Western Pennsylvania, I acknowledge my status as an Israeli outsider, an educator seeking to enlarge my lens on the Middle East. I do not understand the cultural mosaic comprising Israel today, that of Jewish, Muslim, Christian, and Druze citizens, alongside Palestinians, all caught in the century old Israeli-Palestinian Conflict. 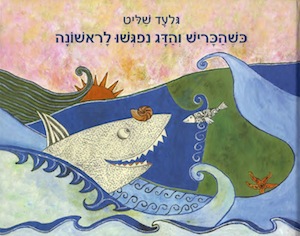 Janet Mendolsohn, our tour guide, took me to a Hebrew Book Week outdoor bookfair. As we perused books, one text quickly evoked an emotional response. How the Shark and the Fish First Met (Kshe-ha-Karish Ve-ha-Dag Nifgeshu Le-Rishona) (Shalit, 2006) is not merely a children’s book. This parable written by an eleven year old Israeli before he became a soldier, prisoner of war, and now sports writer, offers a child’s response to the complexities facing Israelis and Palestinians. I presumed her tearful reaction reflected her heartfelt sympathy for another parent who endured a son’s five-year-long captivity.

The author, Gilad Shalit, born in northern Israeli in 1986, began his compulsory military service at the age of nineteen, like most Israelis. Hamas, a Palestinian militant group, ambushed Shalit’s army post and abducted him in June 2006. For the next five years, he remained a prisoner of war, somewhere in the Gaza Strip. Negotiations between Israeli, Egyptian, French, United States, the Red Cross, the United Nations, and Palestinian leaders broke down repeatedly. Finally on October 18, 2011 Shalit returned home in exchange for 1,027 Hamas and Palestinian prisoners. Britt, the children’s librarian in the Israel Museum’s Ruth Young Wing Illustration Library, described for me this deeply emotional time for her country. She vividly recalled how no one actually worked the day of his liberation but instead remained glued to the TV or computer, watching Gilad’s every step toward freedom.

Nine years before Shalit’s abduction, while in fifth grade he penned a fairy tale about peace. “The story is about a shark and a fish who become friends, who continue to play together despite parental pressure to remain natural enemies, and who ultimately forge peace between their two species.”  One year after Shalit was captured by Hamas, his fifth grade teacher re-discovered his story. Gilad’s parents had already launched a national campaign to keep attention focused on their son’s prisoner of war status and chose to publish his children’s story using illustrations created by 28 Israeli artists.

My initial response as a mother was one of bewilderment, as I contemplated the tumultuous life experiences of an Israeli (or Palestinian) youth that evoked this reflective tale, a longing for peace. This summer my eleven year old is worried about finding time to play baseball or watch Everybody Hates Chris videos on his iPad. What a contrast to Israeli or Palestinian pre-teens today, caught in a never-ending conflict.

Creating a Bridge of Coexistence

During five and a half years of captivity, Gilad Shalit remained in a basement cell, catching a few rays of sunlight each day. Just recently he became a sports writer for an Israeli tabloid, Yedioth Ahronoth. In his first column, he explained how his childhood sports pursuits kept him sane while confined to a cell. “I drew a lot of strength from sports activity, despite the conditions I was under there… It granted me a break from the reality I was in.” His Palestinian captors eventually allowed Shalit occasional access to a radio and TV. Shalit explained further. “We could talk about sports… It was a bridge, something similar.”  My thoughts turn to the thousands of Palestinian, Bosnian Muslim, non-Arab Sudanese (to name a few) prisoners of war and wonder about the potential bridges of compassion available to them while in captivity.

Explore Shalit’s powerful message by listening to people from five European countries read aloud his parable, complete with English subtitles. Before Shalit’s release, the Israeli Education Initiative, based in San Francisco, California, created a teacher packet of materials to help educators take full advantage of this story. One key objective is the Jewish idea of coexistence, “a state in which two or more groups live together while respecting their differences and resolving their conflicts nonviolently… Coexistence and dialogue are universal values and as such worthy of our attention as educators and of instilling their importance on our students.”

Resource materials in the I.E.I. packet offer examples of Israeli organizations actively exploring coexistence today, including one educational group of four schools in Israel. I visited one of these distinctive school in the Galilee region this June. Hand in Hand: Center for Jewish-Arab Education in Israel opened their first school fifteen years ago in 1997, in order to develop a model of multicultural, bilingual education where Arab and Jewish children learn as equals. The goal is to enable children to explore each other’s cultural background, experience and history while simultaneously enhancing their religious and cultural identity. A significant element of this experiment is the on-going work with children’s parents, teachers, and community. A recent book Hand in Hand – Jewish and Arab Families in Israel (Natour, Dayan, Haaasz, 2006) outlines the lives of twenty families, teachers and principals learning at the Hand in Hand schools.

“These schools give hope to the country, the region, and the world, that people who have been wrenched apart by history can still find each other and try and put that history behind them in order to make history anew… The schools illustrate that reconciliation is not a simple fairy tale but an ongoing struggle to negotiate… and to translate the grand process of reconciliation into everyday mundane activity.” (Natour, Dayan & Haasz, 2006).

How can other children’s books besides Gilad Shalit’s parable become bridges that help to initiate conversations between wary groups in all classrooms?

I return to Miriam Roth, a classic Israeli children’s author, whose work I shared four weeks ago in my first blog post. Roth characterizes her vision of outstanding children’s literature and at the same time describes Shalit’s book perfectly. “Excellent literature educates… Children learn a lesson from the fate of others [Shalit] and expand their view of the world.” (Roth, 1969, p. 17) I am anxious to examine the unfamiliar territory of additional children’s books like Gilad Shalit’s in order to discover what my students and I can learn about developing our own critical bridges of understanding.

I must thank my Israeli friends and parents Britt Lavi, Janet Mendolsohn, Yehuda Peled, Sima Shimony, Hagit Turjeman and Vered Vaknin-Nusbaum for graciously supporting my exploration of the possibilities available through conversations with global children’s books for students and families.

“When the Shark and the Fish First Met”

A small and gentle fish was swimming in the middle of a peaceful ocean. All of a sudden, the fish saw a shark that wanted to devour him.  He then began to swim very quickly, but so did the shark.

Suddenly the fish stopped and called to the shark:  ”Why do you want to devour me? We can play together!”

The shark and fish played all day long, until the sun went down.  In the evening, the shark returned to his home.

His mother asked:  “How was your day, my dear shark? How many animals did you devour today?”

The shark answered: “Today I didn’t devour any animals, but I played with an animal called FISH”.

“That fish is an animal we eat. Don’t play with it!” said the shark’s mother.

At the home of the fish, the same thing happened. “How are you, little fish? How was it today in the sea?” asked the fish’s mother.

The fish answered: “Today I played with an animal called SHARK.”

“That shark is the animal that devoured your father and your brother. Don’t play with that animal,” answered the mother.

The next day in the middle of the ocean, neither the shark nor the fish were there.

They didn’t meet for many days, weeks and even months.

Then, one day they met. Each one immediately ran back to his mother and once again they didn’t meet for days, weeks and months.

After a whole year passed, the shark went out for a nice swim and so did the fish. For a third time, they met and then the shark said: “You are my enemy, but maybe we can make peace?” The little fish said: “Okay.”

They played secretly for days, weeks and months, until one day the shark and fish went to the fish’s mother and spoke together with her. Then they did the same thing with the shark’s mother; and from that same day the sharks and the fish live in peace.

22 thoughts on “Israeli Children’s Books: Forming a Bridge Between Cultures?”