As I continue to look at representations of global poverty in picturebooks, resourcefulness remains a predominant theme. Two examples of characters who live in poverty and show resourcefulness come from the books Ada’s Violin, which has been a WOW Recommends: Book of the Month selection, and Malaika’s Costume. 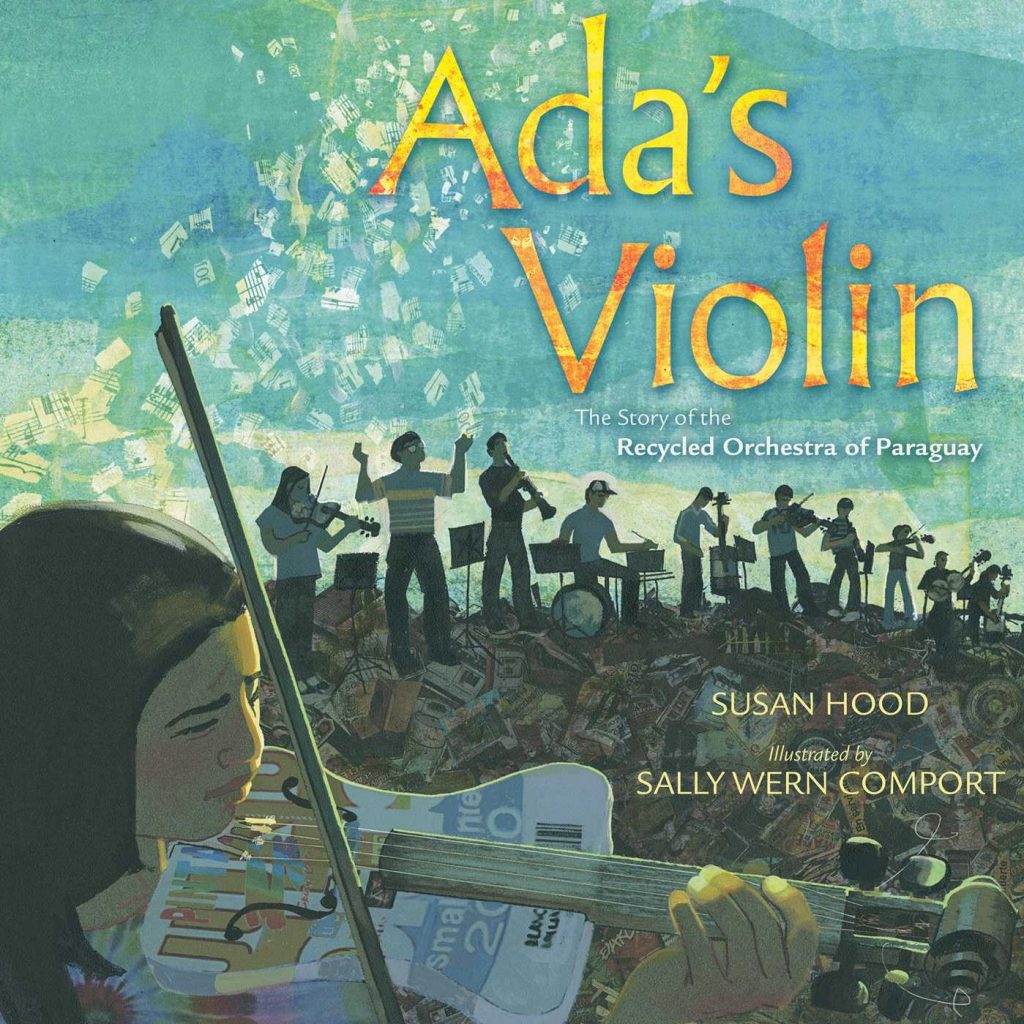 Ada’s Violin: The Story of the Recycled Orchestra of Paraguay by Susan Hood and Sally Wern Comport carries the theme of my previous WOW Currents post forward. This picturebook, based on real events in Cateura, Paraguay, takes the trash-to-treasure concept to another level. This story is set in a town built on a landfill and this trash encompasses the lives of people who live there. As the kids become teenagers, they realize the futility of their existence in a town like theirs. Ada, on the other hand, thinks of the trash as “a box of surprises” where one can find riches. But she also worries about her future. Songs are a part of Ada’s family’s lives as they grew up. Ada’s grandma sings to her and so does her father. When she starts school, Grandma, like her parents, goes to collect trash that can be salvaged or recycled. Knowing their love for music, Grandma signs them up to learn music with Favio Chavez. With few instruments to practice upon, Senor Chavez thinks of creating instruments from the trash surrounding them, as did a band called Les Luthiers. Even though the going is tough, Ada and the others never give up. They continue practicing on their makeshift instruments to the point when the orchestra gains recognition and is invited to perform worldwide.

The book is beautifully illustrated. Unlike in Pablo Finds a Treasure, the characters in Ada’s Violin are shown as well dressed, healthy, and clean. The expressive illustrations add to the content of the story and create meaning within them. The last few pages contain resources about the band and their activities.

In Malaika’s Costume by Nadia L. Hohn and Irene Luxbacher, Malaika lives in Caribbean Island but her mummy has left for Canada where she seeks a good job and a “better way of life” for Malaika and Grandma. They struggle financially and make do as much as they can as they wait for mummy to send money. Meanwhile children are making beautiful costumes to wear for an upcoming carnival. Malaika does not have the resources to make one and is dejected, but then she takes matters in her own hands and asks the tailor for scraps of cloth. Grandma comes up with an idea to convert her own costume into one for Malaika by adding beautiful scraps of cloth and buttons, which Malaika also collected, to it. The costume turns into a peacock with wings and feathers and a headdress. Malaika, with her resourcefulness, overcomes her circumstances and prevails. She dances in the kiddie carnival and enjoys herself. Grandma and Malaika send a picture to Mummy in Canada. The last page is wordless and shows a teary-eyed Mummy opening the envelope and seeing the picture of Malaika in her costume.

The author provides a glossary of Caribbean terms used in the story and the images and the written narrative are richly filled with the colors and life in Caribbean.

In these two books the protagonists overcome their circumstances. They take action and prevail. The audience comes away with the feeling of hope and accomplishment and the dire conditions have a seemingly happy ending. The presence of such books representing poverty in its many facets is a true contribution to the theme itself. Exposing children in affluent nations to lives within other less fortunate lands is commendable. True learning happens when there is discussion on the theme within homes and classrooms so that this leads to empathy and action wherever these books are being read. Using these strong examples of books as a door and a window into other lives and cultures as a powerful tool is recommended.