In this final week of February, I’m continuing Melissa’s look at U.K. award-winning books, in particular the Costa Book Awards. Frank Cottrell Boyce’s The Unforgotten Coat began as an exclusive for The Reader Organisation for their 2011 book giveaway. With 50,000 copies distributed throughout the U.K. and the rest of the world, this brilliant 112 page novella was shortlisted for the Costa Book Awards in 2011, was awarded the Guardian Children’s Fiction Prize in 2012, received The Deutscher Jugendliteraturpreis in 2013, was on the IBBY International Honour List in 2014, and was a starred review for both Kirkus and Publishers Weekly. 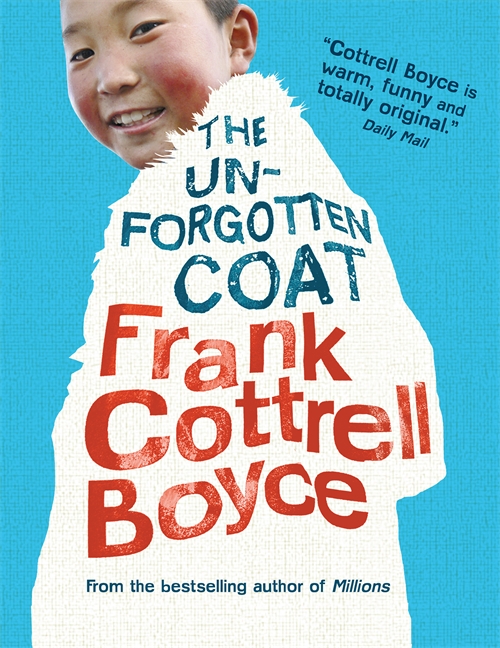 The Unforgotten Coat lets us examine the highly charged immigration policy in the U.K. and could be ripped from headlines across the U.S. It is a story about two refugee brothers who have made a perilous trek from Mongolia to Bootle, a town in England, only to be seized with their family during the night by the Immigration Authorities and returned to Mongolia.

Boyce was inspired by a young girl he met at his first-ever author appearance. In the Afterword of The Unforgotten Coat, he explains that “the thing I remember most is meeting a girl called Misheel. She was a refugee from Mongolia, and she just lit up the room” (p. 97). Sometime after his visit, Boyce learned the Immigration Authorities “snatched” Misheel and her family in the middle of the night, but not before she was able to call her teacher and say goodbye. Misheel had left her coat behind and the image of her coat stayed with Boyce.

Misheel’s story is reinvented for The Unforgotten Coat. Boyce notes, “I changed Misheel into a boy for this book. Because this isn’t Misheel’s story. It’s a made-up story. I didn’t want to tell Misheel’s story because I didn’t want that story to be over” (p. 99). In this story there are three main characters, Julie who is doing the telling, Chingis who shows up in Julie’s sixth grade class one day as a new student, and Nergui, Chingis’s little brother whom Chingis vows to protect. The story opens with Julie, now an adult with her own child, going back to her school for one last look before it is torn down. There in the Lost Property box from her sixth grade classroom, she sees Chingis’s abandoned coat and in the pocket, she finds a series of Polaroid photographs.

Chingis and Nergui’s story unfolds in journal format. On page one is the photo from the day Julie met the brothers and became their “Good Guide” to all things British. The Polaroids, which are digital images of photos taken by Boyce’s collaborators — Carl Hunter and Clare Heney — become the visual counterpoints of Julie’s telling. Julie is nearly to the end of her story before she realizes those photos are more than they first appear and require a closer examination. Like the real Misheel, the brothers and their family are ripped away in the middle of the night with only a quick call to the teacher to say goodbye. “The day Mrs. Spendlove made the announcement; I waited in the cloakroom after school, wondering what to do. I watched all the coats go one by one, until only one was left” (p. 85). Fast forward to the present — Julie is at home and puts the photos she found that day with the ones she already had into a notebook and makes “up a bit of a story to go with the photos, pretending it’s a picture book” (p. 87). As she gets to the end of her story, it suddenly occurs to her that she just might be able to find Chingis; her search begins and her journal ends with one last photo.

About Misheel and the writing of this story, Boyce says, “I don’t know much about immigration policy or the politics of the U.K.’s relationship with Mongolia. Maybe there is some complicated reason why a depopulated and culturally deprived area like Bootle shouldn’t be allowed generous and brilliant visitors. I do know that a country that authorizes its functionaries to snatch children from their beds in the middle of the night can’t really be called civilized” (p. 98). The Unforgotten Coat is Boyce’s reminder, “When politicians are referring to refugees as ‘swarms’ and ‘floods’ as though they were the plagues of Egypt, it’s important to be reminded that we are talking about individuals — as needy, as worthy, as eccentric as we are ourselves” (Lisa, 2015).

Melissa began this month’s blog saying she wanted to share books that would provide points of comparing similarities and differences between Great Britain and the U.S. The Unforgotten Coat is such a book. Pairing this novella with fiction and nonfiction books, such as Ann Bausum’s Denied, Detained, Deported: Stories from the Dark Side of American Immigration (2009), Bettina Restrepo’s Illegal (2011), and Sonia Nazario’s Enrique’s Journey: The True Story of a Boy Determined to Reunite with His Mother (2013) will provide readers an opportunity to take a closer look at immigrant experiences, “read[ing] themselves into the world” (Hill, 2014, p. xiii). As Parsons and Rietschlin (2014) point out, “As characters enter our world through our consciousness, they may move us beyond the literary to personalize world events, spur us to learn more about global issues, or motivate us to promote social change” (p. 149).

One thought on “Notes from a Small Island: The Unforgotten Coat”