A big challenge I faced as a parent of four boys was helping them understand the difference between things that are a big want and things that are a small want. My husband and I had no extra money, so it was important that they grasp the difference so they did not feel deprived! It took multiple discussions for them to develop a nuanced understanding of what was a need and what would be cool to have. The great challenge for me as a parent was providing them with what they didn’t consider to be a want, but that, unbeknownst to them, they needed in order to have a sense of peace, of well-being. Those “hidden” big wants or needs are the focus of this post. 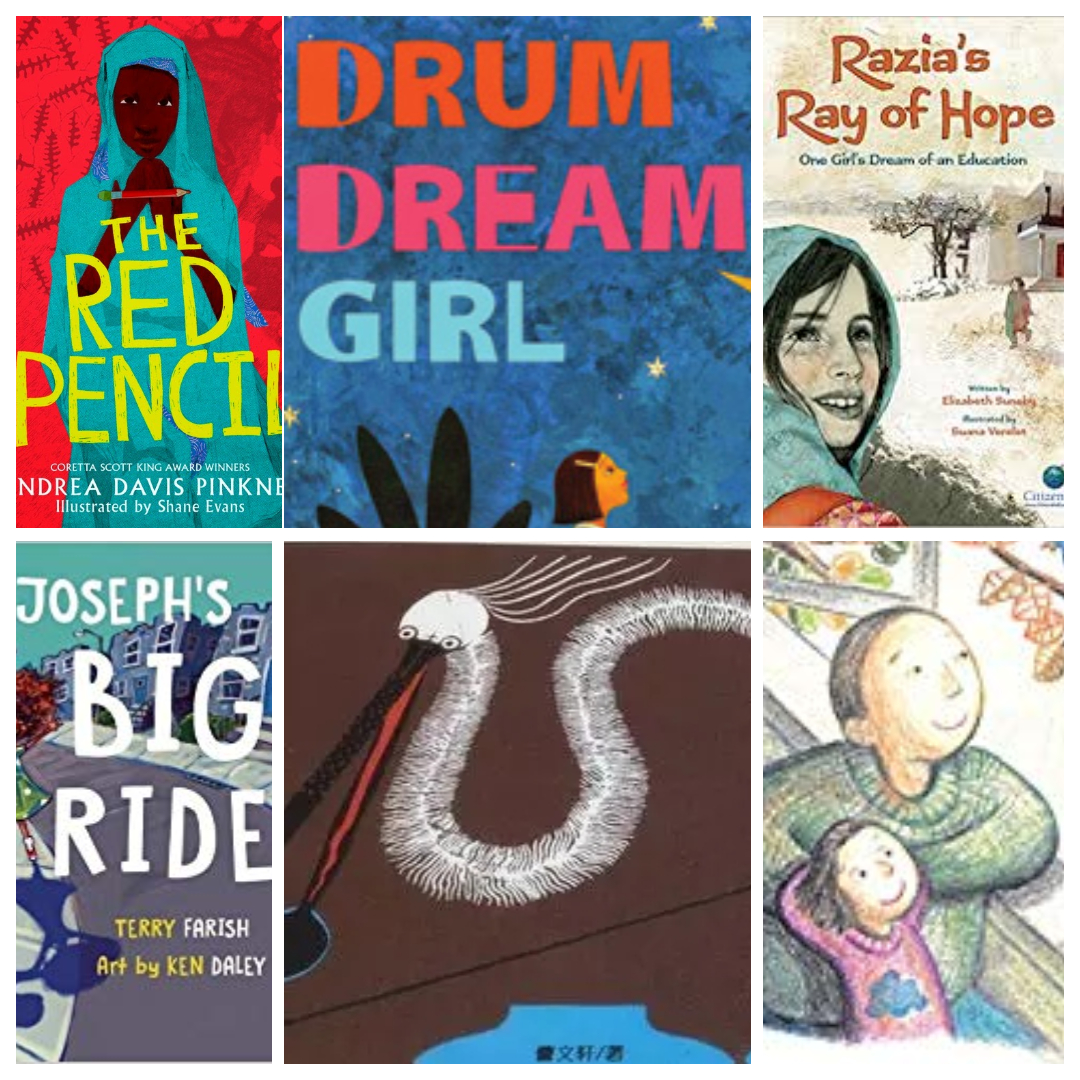 Katherine Scholes and Robert Ingpen, in Peace Begins with You, describe the second characteristic of peace as the opportunity “to have, or to hope for and work for, at least some of the things you want.” They say these can be small wants like a cup of hot chocolate on a winter evening, a walk on an empty beach, or a place where you can be alone with friends. But on the next page they contrast those small wants with big wants like not being afraid, or having the chance to study and learn, and knowing you are loved by family or friends.

The books I discuss here reflect deep-seated desires that fall into the big want/need category. Some of the books describe a child who understands clearly what is needed to feel at peace. Other books describe children who may not grasp that they feel a lack of peace when these things are missing, but there is a deep desire that propels them on a search.

The chance at an education:
Razia’s Ray of Hope: One Girl’s Dream of an Education by Elizabeth Suneby and Suana Verelst
Razia lives in an Afghan village in which teachers are opening a school for girls. She has always wanted to learn to read and write. Often, she sits beside her brothers in the evenings and surreptitiously learns the Dari alphabet. She asks for permission to go to school, but she is told her help at home is too critical to the family. Persistent in her desire, she advocates with her grandfather, mother and the new teacher, seeking their help in persuading her father and older brother to let her go to school. They eventually understand the value of educating Razia and the way it will strengthen the country and their family.

I love the portrayal in words and images of the warm family love Razia enjoys, along with the playfulness of the children. The book works as a counter-narrative to media images of Afghanistan as only a war-torn country.

A feeling of belonging:
Feather by Cao Wenxuan and Roger Mello
A feather travels on the wind, asking many birds if she belongs to them. After a skylark takes her high into the sky, she finds her home under the wing of a mother hen. The story reflects that need in all of us to belong to someone. Both Cao Wenxuan and Roger Mello won the international Hans Christian Andersen award. This exquisite pairing of their talent with words and images beautifully highlights the persistent question of where the delicate feather belongs.

Friends and the chance for fun:
Joseph’s Big Ride by Terry Farish and Ken Daley
Joseph, a young refugee who lives in the Kakuma refugee camp in Kenya, dreams of riding a bicycle. A friend named Daau has a bike, but the problem is that Joseph’s legs are too short. Instead of riding, he helps Daau keep his bike in good repair. Fast forward to Joseph’s new life in America, where he prepares for his first day at school. A young girl with an outrageous hairdo whooshes by Joseph and his mother on a perfectly-sized red bike. In the following pages, the two kids exchange names and language until Whoosh eventually lets Joseph take that long coveted ride on her bike. The story is a wonderful portrayal of kids communicating across cultures, new experiences like riding a bike and the way that new friends are found.

Memorable times with family:
Days with Dad by Nari Hong
A daughter and father discuss activities that build a bond between them. The book begins with the father apologizing for normal activities that he cannot do because he is in a wheelchair. However the daughter points out that he can do many things that give them the same kind of wonderful father-daughter time together as the activities other families engage in. While the father cannot go ice-skating, the duo can ice fish and talk. While the father cannot swim in the ocean with his daughter, they can build sand castles together. With each limitation, the daughter gets to the heart of what the activity accomplishes and finds a way to accomplish the same thing with her wheel-chair-bound father. She flips the perspective from one of limitations to one of adventures with a parent.

This book was selected for the IBBY Outstanding Books for Young People with Disabilities award.

The chance to have a voice:
The Red Pencil by Andrea Davis Pinkney and Shane Evans
Set in a refugee camp in Sudan, Amira dreams of writing about her thoughts and ideas but she has no tools beyond the sand in the camp. When she receives a red pencil from a United Nations worker, her dreams become a bit more possible. Eventually she learns to read and write from an older refugee. At the conclusion of the book, she takes off to a school where she can live and learn to express all her big ideas.

Drum Dream Girl: How One Girl’s Courage Changed Music by Margarita Engle and Rafael López
This book tells the true story of Millo Castro Zaldarriga, a Chinese-African-Cuban girl who has big dreams of playing the drums. But Cuban culture limits drum-playing to boys, so Millo plays on tables and chairs. She longs for the day when she can practice on real congas, bongos and timbales. When faced with her persistence, her father relents and allows her to take drum lessons. Eventually her skill changes the view of many Cubans who thought drumming was only for men.

Next week I look at peace as being allowed to be different. Check out our discussion about seeking peace in children’s literature in last week’s WOW Currents!