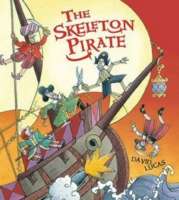 The Skeleton Pirate is the Terror of the Seas, and he’ll never be beaten! That is, until he gets beaten by an unruly bunch of pirates and is thrown overboard. Down in the depths of the sea, he is rescued by a beautiful mermaid, only to be swallowed by a whale. But the whale has a tummy ache from all the other things he has swallowed — like a golden ship full of treasure.