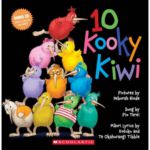 A child, bored by his toys, contemplates the emotion and concept of boredom, and whether or not it is boring to be an adult or a child.

A crocodile seeks revenge on Napoleon for taking him from his home, but instead becomes the talk of Venice high society.

One day, a resolutely ordinary young man named Mr. Whatwilltheysay returns home to find Grain-of-Sand, a mermaid, waiting for him in his favorite armchair. Despite his objections, the two embark on a series of very watery adventures as he tries to get rid of her. But ultimately the thought of being seen with half a fish is simply too much for Mr. Whatwilltheysay to bear—what would people say? So broken-hearted Grain-of-Sand returns to the sea in his bathtub, leaving Mr. Whatwilltheysay to resume his pedestrian existence. Mr. Whatwilltheysay soon finds that his beloved landlubber life, however, lacks the splash and shimmer (and bathtub) of his good times with Grain-of-Sand—and acting against all his instincts, he sets off to sea to find her.

A collection of 21 riotous tales and riddles about the Mullah Nasruddin. Why does Mulla Nasruddin spoon yoghurt into the river? What is the reason he rides his donkey backwards? Why does he paint a picture that is blank? And is he crazy to move into the house of the man who’s just burgled him? Find out all about the amazing antics of Nasruddin in these twenty-one hilarious stories and riddles, famous throughout the Middle East for their jokes, riddles and wisdom.

Mistakenly believing himself to be an emu, a newly-hatched platypus sets out on a long journey, using various forms of transportation and aided by new friends, to reach Australia.

Grown-ups never misbehave, cheat, talk with their mouths full, or complain–despite ample evidence to the contrary.

A seafaring adventure! A storm! Giant turtles! Glowing slugs! A tale of excitement and surprise, Rooster’s Revenge follows The Chicken Thief, and Fox and Hen Together. Together with Bear and Rabbit, the disappointed Rooster makes his way home over the sea when a terrific storm hits. After running aground in the storm, the trio finds themselves in a strange cave. Rooster notices a mysterious glowing ball. What kind of a ball is it? Will it lead them to safety or to more trouble? And will the friends ever find their way home? This illustrated offering from Béatrice Rodriguez is a surprising guide to mending a broken heart. Rooster’s Revenge is the third title in the Fox and Hen series and the fourth in a Stories Without Words series. 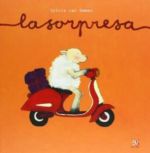 A little sheep shears its own wool, weaves it and sews it, preparing it as a wonderful gift package to surprise its friend.

A hat belongs on the head. But then a gust of wind comes and carries it away. The hat wanders to a duck, a dog, the monkey steals it from the girl, a man loses it to the goat. Until the boy discovers him on a snowman and puts him back on. A lucky hat! A masterful picture book without words to discover, tell and fly along.