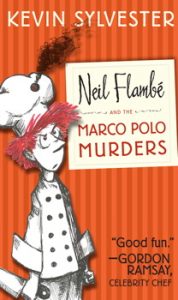 Neil Flambé is a world-renowned chef and restaurant owner. He’s also a kid. And, in his spare time, Neil uses his super-sensitive nose to help the local police solve mysteries. Now, though, the city’s crime scene has taken a turn for the personal: some of the best chefs in town are turning up dead. The cops are stumped; the only real clues are a mysterious smell and some equally mysterious notes that seem to have something to do with Marco Polo. As more chefs fall prey to the killer, Neil can’t imagine how things can get any worse–until he becomes the prime suspect!