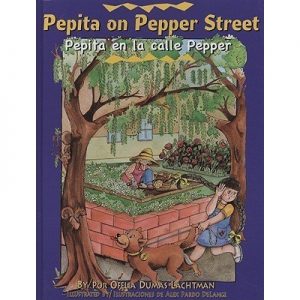 Pepita is almost always happy. But she isn’t today because everything is different on her new street. There’s no familiar grocery store on the corner, and no tortilla shop squeezed right next to it. Rosa’s house isn’t down the street, and worst of all, her best friend Sonya no longer lives right next door. Pepita is definitely not happy about her move to Pepper Street. But her dog Lobo doesn’t mind the new neighborhood, and in fact, he likes the new smells he encounters as Pepita walks him up and down the street. He even wags his tail at the new people they meet: Mrs. Green, who wears a straw hat while weeding her rose garden; Mrs. Becker, who paints the pepper trees, and her dog, Blackie; and Jose, the mailman, who hopes Lobo won’t bite him. Soon, Pepita realizes that her father’s suggestion, “the best way to stop feeling new is to get to know people” is good advice. And when a girl with bright red hair named Katie Ann comes by to visit, Pepita learns that making new friends isn’t so hard after all.