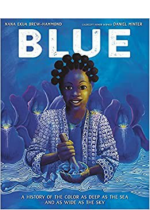 For centuries, blue powders and dyes were some of the most sought-after materials in the world. Ancient Afghan painters ground mass quantities of sapphire rocks to use for their paints, while snails were harvested in Eurasia for the tiny amounts of blue that their bodies would release. And then there was indigo, which was so valuable that American plantations grew it as a cash crop on the backs of African slaves. It wasn’t until 1905, when Adolf von Baeyer created a chemical blue dye, that blue could be used for anything and everything–most notably that uniform of workers everywhere, blue jeans. With stunning illustrations by Caldecott Honor Artist Daniel Minter, this vibrant and fascinating picturebook follows one color’s journey through time and across the world, as it becomes the blue we know today.

This book is the WOW Recommends: Book of the Month for November 2022.