It is 1943, and thirteen-year-old Michael O’Shaunessey, son of the Irish ambassador to Nazi Germany in Berlin, is also a spy for the British Secret Service, so he has joined the Hitler Youth, and pretending that he agrees with their violence and book-burning is hard enough but when he is asked to find out more about “Projekt 1065” both his and his parents’ lives get a lot more dangerous. 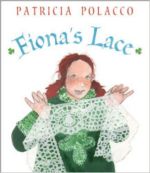 “Fiona and her family moved from Ireland to Chicago to begin a new life. Yet, when the family is struck with misfortune, will Fiona’s lace help save them?”–

Andy Flynn is one of those saved, but his mother and stepfather both die in the flood. Suddenly the only world Andy has ever known is gone and he is alone. Aunt Mona, whom he has never met, takes him to live with her in Halifax, on the opposite side of the country. During the trip, Aunt Mona reveals to him that his father is still alive – and living in Halifax. As soon as they reach their destination, Andy escapes to find his father. Although Vincent Flynn may not be the perfect father, Andy wants to stay with him rather than live with his harsh aunt.