Scarlett McCain is a shoot-first ask-questions-later kind of outlaw. She scrapes by on bank heists, her wits—and never looking back.
She’s on the run from her latest crime when she comes across Albert Browne. He is the sole survivor of a horrific accident, and against her better judgement, Scarlett agrees to guide him to safety.
This is a mistake. Soon there are men with dogs and guns and explosives hot on their heels. Scarlett’s used to being chased by the law, but this is extreme. It was only a little bank she’d robbed . . .
As they flee together across the wilds, fighting off monstrous beasts, and dodging their pursuers, Scarlett comes to realize that Albert Browne is hiding a terrible secret. And that he may be the most dangerous threat of all.

Angry over his family’s recent move and current enforced holiday in Halifax, twelve-year-old Laz Berenger rebels against a guided tour of the Citadel and sets out to explore on his own. In one dark tunnel, his St. Christopher medal burns suddenly hot. There’s a strange smell, and Laz blacks out. When he wakes up, everything happens at once. A sword is put to his throat. Men who look like extras from Pirates of the Caribbean hand him over to a ship’s captain who strips him and takes his medal. He is declared a French spy. Laz realizes, to his horror, that it is 1745 and he is trapped in time. These English colonists, still loyal to King George, are at war with the French. To earn his freedom, Laz must promise to spy on the French at the fortification of Louisbourg. But once in Louisbourg, Laz earns a job as runner to the kind Commander Morpain and learns to love both the man and the town.

It is 1943, and thirteen-year-old Michael O’Shaunessey, son of the Irish ambassador to Nazi Germany in Berlin, is also a spy for the British Secret Service, so he has joined the Hitler Youth, and pretending that he agrees with their violence and book-burning is hard enough but when he is asked to find out more about “Projekt 1065” both his and his parents’ lives get a lot more dangerous. 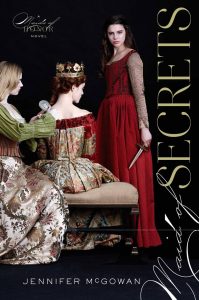 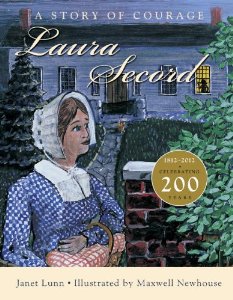 The war between Great Britain and the United States was a bitter one. For two years, from the summer of 1812 to the winter of 1814, fierce and bloody battles were fought. Laura Secord never thought of herself as brave. She was gentle, shy, and soft-spoken. But she was brave. When American officers took over her home, demanding food, she heard them boasting about a plan that would give them an easy victory over the British troops. Laura’s husband, James, would have gladly warned the British, but he had been badly injured. It fell to Laura to make the grueling trip. Janet Lunn, one of the country’s finest writers of historical fiction, recounts the tale of Laura’s dreadful journey with fresh detail and masterly prose. Her writing is perfectly complemented by Maxwell Newhouse’s astounding paintings.

The nefarious leader of the Ring of Five, Ambrose Longford, is still determined to control both the Upper World and Lower World. But Danny and his friends at Wilson’s school for spies stand in his way. As Danny struggles with his role in the spy world, Longford is attempting to bring down the other members of the Ring, to usurp all of its power. Or is he?

Modo, the shape-shifting, masked spy, and fellow spy Octavia Milkweed learn that Modo’s biological parents are still alive but when the Clockwork Guild find Modo’s parents first, Octavia and Modo chase them across Europe and North America to the Island of Doom.

Ruby, a genius code-cracker and daring detective, along with her sidekick butler, Hitch, work for a secret crime-busting organization called Spectrum. Ruby gets into lots of scrapes with evil villains, but she’s always ice-cool in a crisis. Just take a classic screwball comedy, add heaps of breathtaking action, and multiply it by Lauren Child’s writing genius, and what have you got? Only the most exciting new middle-grade series since, like, ever.