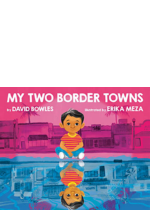 Early one Saturday morning, a boy prepares for a trip to The Other Side/El Otro Lado. It’s close–just down the street from his school–and it’s a twin of where he lives. To get there, his father drives their truck along the Rio Grande and over a bridge, where they’re greeted by a giant statue of an eagle. Their outings always include a meal at their favorite restaurant, a visit with Tío Mateo at his jewelry store, a cold treat from the paletero, and a pharmacy pickup. On their final and most important stop, they check in with friends seeking asylum and drop off much-needed supplies.

In Petra Postert and Jens Rassmus’s illustrated I Need All of It, a little boy recounts to his father the tales of how he received the three objects in his pocket and why he needs to keep them.

Having arrived in Candeia, Brazil, starving and footsore, after walking sixteen days to fulfill his dying mother’s last wishes, young Samuel takes up residence in an enormous, broken statue of Saint Anthony and finds that he can hear the prayers of the townspeople, despite his lack of faith.

My dad died twice. Once when he was thirty-nine and again four years later, when he was twelve. On his twelfth birthday, Al Chaudhury receives a letter from his dead father. It directs him to the bunker of their old house, where Al finds a time machine (an ancient computer and a tin bucket).

Kiyoshi’s love for making paper lanterns becomes a problem when it distracts him from learning the more practical farming skills taught to him by his father. Fascinated by dragonflies that hum in their rice paddy, Kiyoshi crafts a lantern that changes his destiny.

Andy Flynn is one of those saved, but his mother and stepfather both die in the flood. Suddenly the only world Andy has ever known is gone and he is alone. Aunt Mona, whom he has never met, takes him to live with her in Halifax, on the opposite side of the country. During the trip, Aunt Mona reveals to him that his father is still alive – and living in Halifax. As soon as they reach their destination, Andy escapes to find his father. Although Vincent Flynn may not be the perfect father, Andy wants to stay with him rather than live with his harsh aunt.

Taylor loves birds and collects eggs. He has the rare opportunity to enhance his collection when a pair of red kites nest nearby. The only problem is, the red kites are extremely rare – only twenty-five are left in the country. Taylor’s father, a gamekeeper, is under orders from his boss, the landowner Reg Harris, to kill the kites, who are birds of prey and will go after Harris’s grouse population. For Taylor, the temptation also to take the eggs from the kites’ nest becomes insurmountable when Harris actually asks him to do the job, even though it is illegal. Pangs of terrible guilt follow, and although Taylor tells Harris he’s gotten rid of the incriminating evidence, he secretly salvages and hatches one egg. But as soon as the bird is born, elaborate plans must be made to keep its existence a secret in order to save it from being shot during the approaching hunting season.

Still looking for a place to hibernate, Papa Bear follows Baby Bear to a cruise ship, and winds up on a tropical island.