When two unlikely friends build a vessel capable of taking them to the bottom of the ocean find a missing treasure—the truth turns out to be far more amazing.

As a group of refugees huddles together in a rubber dinghy, one of them uses his violin to weave their stories together and give them hope for freedom in the future. 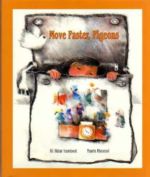 Azadeh is anxiously waiting for the time when she can go to school and play with the other children. Her father says that soon she can go, when the clock strikes seven. It seems to Azadeh that the two pigeons in the clock make the hands move by pulling on the bar they’re connected to. The pigeons look tired, but Azadeh wishes for the pigeons to move faster so she can go to school. She discovers that one of the pigeons has a broken wing and it cannot work properly.

The Story is about a stingy and greedy farmer who loses his prized sheep, one by one. 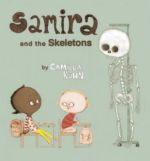 A humorous story, wonderfully delivered through text and images. Samira is shaken when she learns at school that everyone has a skeleton inside them. She begins to see everyone as walking bones and even asks her mom to help her escape her own skeleton.

Shadowman, realizing that Saint George’s army is headed toward the center of London, has raced ahead to warn the kids of the impending disaster. He knows that he has to make them understand somehow that they are going to have to work together.

When I was three years old, Mom plucked a curly white feather out of my neck. If I get scared or the loneliness comes over me, I run my fingertip over the tiny scar and dream about the day the rest of my feathers will grow in. That’s the day I’ll fly away from here. For eleven-year-old Finch, there couldn’t be a better time to fly away from her life.

When a massive storm at sea blows the Brotherband crew off course to a land so far west Hal cannot recognize it from his maps, they face an unknown enemy.

Colt Jenson and his younger brother, Bastian, have moved to a new, working-class suburb. The Jensons are different. Their father, Rex, showers them with gifts toys, bikes, all that glitters most and makes them the envy of the neighborhood. To the local kids, the Jensons are a family out of a movie, and Rex a hero successful, attentive, attractive, always there to lend a hand. But to Colt he’s an impossible figure: unbearable, suffocating.