How to Save a Species brings readers as close as they may ever get to some of the most endangered animals and plants on earth. Highlighting the efforts of scientists, communities, and campaign groups, it includes the astonishing success stories of species that have been saved from the edge of extinction, as well as urgent cases in need of immediate action.

To the animals of Lodge Farm, the woods are a forbidden place filled with danger and uncertainty. For the wild animals in the forest, the farm is just as frightening, because Man lives there. The two worlds are next to one another, but couldn’t be further apart.

Since the year 1900, cheetah footprints quickly dwindled in African dirt as the species plummeted from more than 100,000 to fewer than 10,000. At the Cheetah Conservation Fund’s (CCF) African headquarters in Namibia, Laurie Marker and her team save these stunning, swift, and slender creatures from extinction. Since the organization’s start in 1990, they’ve rescued more than 900 cheetahs, most of whom have been returned to the wild.

In 1934, Ruth Harkness had never seen a panda bear.  Not many people in the world had.

But soon the young Mrs. Harkness would inherit an expedition from her explorer husband: the hunt for a panda.  She knew that bringing back a panda would be hard. Impossible, even.  But she intended to try.

So she went to China, where she found a guide, built traps, gathered supplies, and had explorers’ clothes made—unheard of for a woman in those days.  Then she set out up the Yangtze River and into the wilderness.  What she discovered would awe America: an adorable baby panda she named Su Lin, which means “a little bit of something very cute.”

Baby Hajime spends a night talking and laughing with the animals in the North Woods but chooses to return to his parents in the morning. 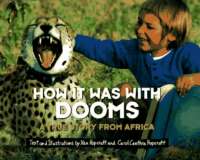 The story presents an extraordinary personal portrait of a wild African cheetah named Dooms and the human family with whom he chose to make his home.