Maylin cooks delicious meals every day in her father’s restaurant, but her lazy brothers take all the credit. One day a contest is held to honor the visiting governor of South China, and Maylin’s brothers decide to pass off her cooking as their own. But when neither they nor the governor can replicate Maylin’s wonderful dish, they all learn that there’s more to the art of good cooking than the right ingredients. Paul Yee’s charming text and Harvey Chan’s dramatic watercolors transport the reader to another time and culture.

Ning enters a cutthroat magical competition to find the kingdom’s greatest master of the art of brewing tea, but political schemes and secrets make her goal of gaining access to royal physicians to cure her dying sister far more dangerous than she imagined.

After his augmented reality gaming headset is possessed by the spirit of the First Emperor of China, twelve-year-old Chinese American Zack Ying is compelled to travel across China to steal an ancient artifact, fight figures from Chinese history and myth, and seal a portal to prevent malicious spirits from destroying the human realm. 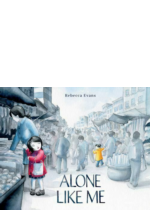 When Liling moves from her home in the mountains of China to the big city, her parents cannot afford to send her to school, and she spends her days with her mother, wishing she had a friend–until she sees a girl in a yellow coat, who lives in the next building, comes from a different mountain, and is happy to be Liling’s friend. 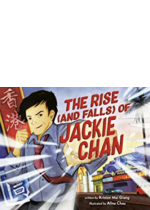 An action-packed picture book biography about Hollywood actor, stuntman, and beloved superstar Jackie Chan! A great read for Chan fans hoping to share their love of Rush Hour, Supercop, and Jackie’s original brand of martial arts with their ready-to-tumble tyke. 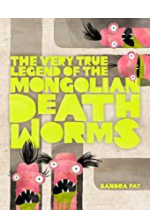 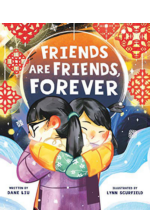 Just before Chinese New Year, Dandan discovers that her family is moving to America, far away from her best friend Yueyue; before they leave Yueyue gives her a stack of red paper and a spool of string so she can share the art of paper cutting with Americans–and when Chinese New Year comes around again Dandan remembers Yueyue’s gift and introduces her new friend Christina to this ancient art.

Twins Mei and Yun can’t wait for the Mid-Autumn Harvest Festival, even though strange things keep happening in their village. A gloomy atmosphere has settled over the land and their grandpa’s usually delicious mooncakes instead taste horrible and bitter, insulting the prince who tastes them.
Determined to clear grandpa’s name, Mei and Yun journey through the City of Ashes, visit the mysterious Jade Rabbit, and encounter a powerful poet, who makes them a pact: infiltrate the royal palace to expose a past royal injustice, and the poet will remove the curse that has ensnared their grandfather and village.

A lonely eleven-year-old Hmong girl with the unique ability to see spirits, she spends her summer days babysitting her little brother and playing with her best friend, a cat spirit no one else can see. One day Pahua accidentally untethers an angry spirit from the haunted bridge in her neighborhood–whoops. When her brother suddenly falls sick and can’t be awoken, Pahua fears that the bridge spirit has stolen his soul. She returns to the scene of the crime with her aunt’s old shaman tools, hoping to confront the spirit and demand her brother’s return. Instead, she summons a demon

1826. The sun is setting on the golden age of piracy, and the legendary Dragon Fleet, the scourge of the South China Sea, is no more. Its ruthless leader, a woman known only as the Head of the Dragon, is now only a story, like the ones Xiang has grown up with all her life. She desperately wants to prove her worth, especially to her mother, a shrewd businesswoman who never seems to have enough time for Xiang. Her father is also only a story, dead at sea before Xiang was born. Her single memento of him is a pendant she always wears, a simple but plain piece of gold jewelry.
But the pendant’s true nature is revealed when a mysterious girl named Anh steals it, only to return it to Xiang in exchange for her help in decoding the tiny map scroll hidden inside. The revelation that Xiang’s father sailed with the Dragon Fleet and tucked away this secret changes everything. Rumor has it that the legendary Head of the Dragon had one last treasure―the plunder of a thousand ports―that for decades has only been a myth, a fool’s journey.
Xiang is convinced this map could lead to the fabled treasure. Captivated with the thrill of adventure, she joins Anh and her motley crew off in pursuit of the island. But the girls soon find that the sea―and especially those who sail it―are far more dangerous than the legends led them to believe.