‘On a gentle slope in rolling hills stood a little house of wood and stone. There were hens and bees and apple trees, bright flowers and soft green grass. And Nari had a little lamb of her very own.’

As the seasons change, Nari and her parents shear her sheep’s fleece, and spin and dye the wool. Nari knits the yarn into a cosy yellow scarf. But as Nari grows older, her beloved scarf becomes tattered. It’s time to recycle the wool into compost, with a little help from the worms. This charming picture book will help children understand where clothing comes from, and is a joyful celebration of traditional crafts and sustainable living. The luminous illustrations are full of character, texture and seasonal detail.

From internationally acclaimed illustrator Melissa Castrillon comes a magical story of how a girl’s garden in her new home changes her life and the lives of people all around her.When a little girl moves from her home to an apartment in the city, she takes her pretty plants with her and one by one they grow and bloom and change both her world and the world all around her as she makes a new friend. When your heart is open, the world is full of possibilities.

One hot summer morning, only weeks after his father’s death, Davie steps out his front door into the familiar streets of the Tyneside town that has always been his home. But this seemingly ordinary day takes on an air of mystery and tragedy as the residents learn that a boy has been killed. Despite the threat of a murderer on the loose, Davie turns away from the gossip and sets off toward the sunlit hill above town, where the real and imaginary worlds begin to blur around him. As he winds his way up the hillside, Davie sees things that seem impossible but feel utterly right, that renew his wonder and instill him with hope. Full of the intense excitement of growing up, David Almond’s tale leaves both the reader and Davie astonished at the world and eager to explore it. Award-winning author David Almond pens the dreamlike tale of a boy rediscovering joy and beauty within and around him, even amid sorrow.

This stunning lift-the-flap book takes readers on a journey around the globe and deep underground. There they’ll find amazing hidden worlds teeming with life — from prairie-dog towns and ant cities to opal mines and treasure-filled tombs. Each spread is bursting with details and surprises to discover in the cutaway artwork and under the flaps. With so much to see and explore, this is a perfect gift for young adventurers.

Nora Brech’s gothic illustrations are packed with imaginative details and perspectives. Through an extreme wide-angle lens, she draws the reader in to a powerfully detailed, filmic world. 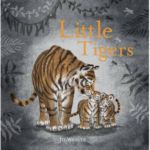 Follows a mother tiger and her cubs, Sera and Puli, as they seek a new home away from the men and dogs hunting near their den.

In this resonant story, Cam the mountain boy follows the river from its trickling source in the mountain snow all the way to the coast. The river leads him through forest, farms, and towns to the salty wind of the sea. Dramatic landscape illustrations evoke a North American landscape and are packed with detail to explore the world of the river.

As we delve into the magical realm that is our universe at night, we discover what makes it so extraordinary: from moonbows to shooting stars and from the polar night to the northern lights. Experience how different habitats, from the city to the ocean, come alive when the sun sets. Meet animals that make their own elaborate beds and others that sleep while swimming or flying. And explore the history of human sleep across the globe and dive into a world of dreams.