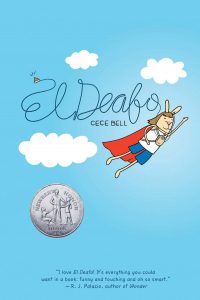 Cece is four years old when a bout of meningitis leaves her severely deaf. In this captivating graphic memoir and Newbery Honor Book, we follow author Cece Bell through her early childhood and elementary school years. We see her trying to make sense of confusing doctor’s visits, acclimating to hearing aids, experiencing the wonder of finding other children like her during her year at a school for the Deaf, and navigating the trials of integrating into a hearing school. Although Cece is faced with many challenges, the author keeps the tone light by sharing many funny moments, such as her misunderstanding of her friend’s offer of cherry pop, juice or a Coke to be “Jerry’s mop, shoes or a goat” (p. 25).

Cece’s big discovery comes when she is fit with a Phonic Ear, a powerful hearing aid that has a receiver box on a strap around her neck, wired earpieces, and a microphone worn by her teacher. To Cece’s delight, she finds that she can hear her teacher when she leaves the classroom, talking in the teacher’s lounge and even using the bathroom! Suddenly, Cece has an ability the other children don’t have, and with this, her imagined super-hero self, El Deafo, is born. El Deafo uses these new-found powers to her advantage and prevents her class from being surprised by their teacher’s return when she has left the classroom, impressing her classmates. Deaf, hard of hearing, and hearing readers alike will find themselves able to relate to Cece’s desire to fit in and her search for a true friend. The experience of wanting to be accepted by our peers makes this story widely relatable.

The graphic novel format is well-suited to provide an inside look at Cece’s experience. To reflect moments when she struggles to hear, some speech bubbles are empty, filled with nonsense words or filled with faded partial sentences. In one instance, a failing hearing aid battery is cleverly illustrated using words fading to nothing. The illustrations are colorful and inviting and the facial expressions give depth to the story. The author has explained in interviews that she chose to depict all the characters as rabbits because their large ears emphasize the role of hearing in the story, and allow the cords of the Phonic Ear to stand out, making them look as conspicuous as she felt they were when growing up.

Cece Bell’s story is just one of many experiences of people who are deaf or hard of hearing, as described in the author’s note. As a child, Cece rejected attempts by her mother to introduce her to American Sign Language, and she now relies solely on lip reading and hearing aids. For many, hearing aids are not an option, as there is not enough or no sound transmission ability. Even if amplifying sound is an option, some members of the Deaf community do not choose to do so. In this way, the story cannot be generalized as representing the experience of all deaf individuals; however, the author explains that the challenge to communicate is shared. As a result, Bell’s story has been embraced by many deaf and hard of hearing children (Bayliss, 2017).

This text is recommended for ages 8-12, but can be enjoyable and instructive to older readers as well. Educators might pair this book with the video, A View from the Window, depicting the school day of third graders at California School for the Deaf. Cece Bell has created a series of in-depth YouTube videos about El Deafo in which she describes the experiences on which the story is based, as well as how she chose to tell the story. Another autobiographical graphic novel depicting the experience of living with a disability is Guts by Raina Telgemeier (2019) illustrating her struggle with anxiety and panic attacks. For slightly older students, El Deafo would pair well with Canadian author Jean Little’s (1987) autobiographical novel Little by Little: A Writer’s Education about growing up legally blind and finding herself through writing. Another option for older students is Ruth Behar’s (2017) novel Lucky Broken Girl based on her own childhood experience as a Cuban-Jewish immigrant to the United States who was confined in a body cast for months after a car accident. Each of these pairings can offer a new perspective to students, offering windows into another experience, or, in some cases, mirroring their own.

WOW Review, Volume XIII, Issue 1 by World of Words is licensed under a Creative Commons Attribution-NonCommercial-ShareAlike 4.0 International License. Based on work by Nina Reiniger at https://wowlit.org/on-line-publications/review/volume-xiii-issue-1/5/