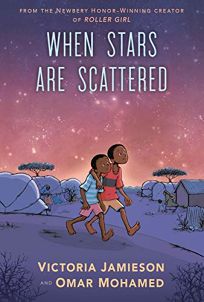 This compelling graphic memoir was created collaboratively to tell the story of Omar, a Somali boy growing up in a refugee camp in Kenya as he tries to make a future for himself and his brother. When soldiers attack his village in Somalia, he and his brother are separated from their mother and eventually make their way to Dadaab, a crowded camp in Kenya. Omar and Hassan, who has a seizure disorder and is mostly nonverbal, live with Fatuma, a kindly elderly woman assigned to take care of them. The book covers six of Omar’s 15 years in the camp, capturing significant moments in Omar’s life as he struggles with trauma, uncertainty, and boredom while also experiencing the love and support of his community. Omar is faced with decisions about attending school and the reality that only a few opportunities exist to leave the camp and be resettled in a new land. Although the last page portrays Omar and his brother on a plane to the U.S, other characters depict the range of realities for refugees who are trapped in the camp, including teen girls who are married to older men, children who bring hope and possibility to their lives, and others who give up in depression and anger.

This absorbing story is told with honesty, revealing the tremendous difficulties and desperate situations that Omar and other refugees experience along with the loving moments that allow them to remain compassionate and carve out meaningful lives. The graphic format uses full-color panels created by Jamieson with colors by Iman Geedy to capture the camp setting and the deep purple skies of stars. The illustrations portray the complex and confused emotions of the characters, who come alive and stay with readers long after the book is put down. The back matter includes photographs of the brothers and an authors’ note about how Omar and Victoria collaborated and details about Omar’s life since leaving the camp. They also indicate which parts of the book are fiction, for example, the secondary characters are composites of people in the camp.

This engaging heartwarming memoir is filled with empathy and compassion that challenges our perspectives about life in an unfair world. Omar leaves readers with the admonition to never give up hope no matter how desperate the situations in which we find ourselves. The sensitive story exemplifies the resiliency of the human spirit and our need for relationships and purpose. Education is depicted as a highly sought-after opportunity, not available to all, that makes a tremendous difference in people’s lives. The book has received multiple starred reviews and was named a National Book Award Finalist for 2021.

Victoria Jamieson lists the following resources on her website for readers who want to explore the background of this book in greater depth:

Educational Challenges: A glimpse into a primary school in Dadaab, and the challenges facing young people who want an education. (2 minutes)

This book is unusual in that the entire book is set within a refugee camp, with several flashbacks to the events in Somalia and ending with Omar on a plane to the U.S. The book could be paired with other novels in refugee camps, such as The Bone Sparrow (Zana Fraillon, 2016) about a Rohingya refugee boy from Myanmar who has spent his entire life in a refugee camp in Australia and The Milk of Birds (Sylvia Whitman, 2013) about two teens who are pen pals, one in a Sudanese refugee camp and the other in Richard, Virginia. Another interesting pairing is books about internment camps in the U.S. such as Weedflower (Cynthia Kadohata, 2006) set in a Japanese-American internment camp during WWII and Internment (Samira Ahmed, 2019), a dystopian novel in which Muslim Americans are forced into internment camps.

The novel could also be read alongside a picturebook text set on refugee camps, including My Beautiful Birds (Suzanne Del Rizzo, 2017) about a Syrian boy who misses his birds, The Roses in My Carpet (Rukhsana Khan & Ronald Himler, 1998) about an Afghan boy worried about his sister, Lubna and Pebble (Wendy Meddour & Daniel Egnéus, 2019) about a Syrian girl whose friend is a pebble, Four Feet, Two Sandals (Karen Williams, Khadra Mohammed, & Doug Chayka, 2007) about two Afghan girls who share a pair of sandals, and The Banana-Leaf Ball (Katie Smith Milway, 2017), a nonfiction book about a camp in Tanzania where a coach organizes soccer games as an alternative to gangs.

Victoria Jamieson has created other middle-grade graphic novels, including All’s Faire in Middle School (2017) and the Newbery Honor book Roller Girl (2015). This book grew out of her work as a community volunteer, greeting refugee families at the airport and working as a cultural liaison. Both she and Omar live in Pennsylvania and met through his position at a resettlement center for refugees. At the time, he was looking for a co-author to write an adult memoir and, after several conversations, they decided to work together on a children’s book. In an author’s note, Victoria describes meeting every few weeks with Omar and the strategies she used to remain true to his memories and experiences. She notes her shift in thinking about how to tell stories to learning how to listen to stories.

Omar initially resettled in Tucson, Arizona where he graduated from the University of Arizona and then married and moved to Pennsylvania as a resettlement case manager. His non-profit organization, Refugee Strong, delivers school supplies and other resources to children living and attending school in Dadaab refugee camps in Kenya.

The third member of their team is Iman Geddy, the colorist for this book. She is an Atlanta-based designer and illustrator committed to using the graphic arts for social good.

WOW Review, Volume XIII, Issue 1 by Worlds of Words is licensed under a Creative Commons Attribution-NonCommercial-ShareAlike 4.0 International License. Based on work by Kathy Short at https://wowlit.org/on-line-publications/review/volume-xiii-issue-1/9/