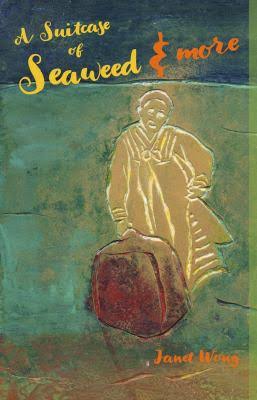 COVID-19 created a crisis of threat for Asian people in global locations. The news media reported incidents of Asian people being attacked in big cities in Europe and North America and accused of causing the coronavirus. Each time the U.S. President called COVID-19 the “Chinese virus” at press conferences, the crisis became even bigger for Asian People. To many Asian diasporas, the word “Chinese” functions nearly synonymously with “Asian” in general. Asian is a convenient label for people with the look of Asians, but it doesn’t say much about the person. A Suitcase of Seaweed & More is Janet Wong’s story, told in autobiographical-poetry, demonstrating that the “Asian” label minimally explains who she is and where she is from. In this uncertain pandemic era, A Suitcase of Seaweed & More is meaningful as it explores Wong’s identity and her place of belonging, including her family history in the U.S.

A Suitcase of Seaweed & More was originally published in 1996 and republished in 2019 with additional textual features. The facing page for each poem has texts in various genres that reflect Janet Wong’s voice and enhance the reading experience. In gray boxes Wong relates the background story of the poem, and at the bottom of the page asks a thinking/writing question that prompts readers to reflect on their own cultures and invites them to be writers or poets.

The book has three sections of poems reflecting Wong’s three identities — Part 1: Korean Poems; Part 2: Chinese Poems; Part 3: American Poems. The first poem in each section introduces Wong’s connection to that culture: My Mother is Korean, My Father is Chinese, and lastly, I am American. Though Wong is Asian, her American side is her dominant cultural identity.

Wong’s poems tell the story of her mother and father becoming a family in a Koreatown community. The stories in her poems invite readers to look at past and contemporary Korean-immigrant cultures. Koreatown’s growth in Los Angeles is a part of California history and Korean women’s dynamic role in beauty salons is still mirrored in today’s socializing culture of hair salons. Her Chinese side has more of her grandfather’s (GongGong) story. GongGong brought his wife and his son after World War II to the U.S. In the 1950s, they opened up a restaurant, “Wong’s Café.” Wong’s GongGong and his community tell a story of friendship, family business, and Chinese relatives’ interactions with Wong’s family whom they assume are rich Americans. Finally, in Part 3, Wong starts her American story with her birth in Los Angeles. Her bicultural identity, half Chinese and half Korean, brings her unpleasant memories. She notes, “Some non-Asian people look at Asians and lump us all together. Japanese, Chinese, Korean: They think we are the same. There are some similarities among these cultures, but there are also enormous differences — and a history of war between Japan, China, and Korea. Even today, a Japanese person is likely to encounter some bias in China, and a Korean person might feel discriminated against in Japan” (p.67).

A Suitcase of Seaweed & More contains stories that reflect many of us. We are part of a family, community, and country. American youth with immigrant (grand)parent stories can read similar stories in books like I’m OK by Patti Kim (2018), Clara Lee and Apple Pie Dream by Jenny Han (2011), and young adult books like This is My Brain In Love by I.W. Gregorio (2020) and Frankly In Love by David Yoon (2019). Children and adolescent readers will appreciate these books that allow them to reflect on their intersectional cultural identities and rich heritage cultures through intergenerational relationships and family dynamics. Most of all these books challenge readers to think about what it means to be American.

Wong is a significant author of children’s books and poetry who has been advocating for classroom use of poems for young readers and teachers over the years. Her recent poetry anthology books include Great Morning! Poems for School Leaders to Read Aloud (2018), Here We Go (2017), Pet Crazy (2017), You Just Wait (2016), and The Poetry Friday Anthology series (authored with Sylvia Vardell). These are widely read in classrooms and help young readers to embrace their cultural and linguistic identities through poetry. Suitcase of Seaweed & More was selected as one of the NCTE Outstanding Children’s Poetry books in 2019.

Editor’s note: Janet Wong commented on a poem that did not make it into the original text or the reprint, but that communicates the intricacies of straddling different cultures. See the blogpost.

WOW Review, Volume XIII, Issue 1 by World of Words is licensed under a Creative Commons Attribution-NonCommercial-ShareAlike 4.0 International License. Based on work by Yoo Kyung Sung at https://wowlit.org/on-line-publications/review/volume-xii-issue-1/8/