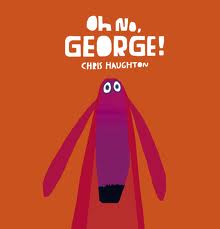 Anyone who is crazy about dogs will love Oh No, George! and those just wanting a fun read will as well. George wants to be good. He has the best intentions, but he just can’t help himself. He eats all of the cake, chases the cat, and digs in the dirt. With a great deal of effort and the desire to please his people, George manages to resist his next encounters with a cake, a cat, and the dirt, but what about that wonderfully smelly trash can….

It’s not clear whether George is actually a dachshund, but if his snout is any indicator, he’s got some badgerhound in his blood and certainly in his heart! George has that “weinerdog look.” Every doxie owner in the world knows that look—it’s the one where they turn their head and look at you over their shoulder with the whites of their eyes showing. That look can mean anything from “woe is me” to “how could you?” Haughton’s illustrations catch those well-known looks and all the others—“the wheel’s turning” look, also known as “what can I get into now?” Then there’s the “cat, cat, cat!” look; it’s one of unmistakable glee as the chase begins. Haughton, who is an Irish designer and illustrator now living in London, creates the pictorial text with pencil and digital media, capturing the whimsical nature of George from his sorrowful looks to the joy of the chase. Haughton says, “I try to tell the story through the images alone and the text just serves as an extra to accompany it.” Readers will delight in all of George’s “looks” and for those who want to know how Haughton developed the idea for Oh No, George!, they can visit his website.

Haughton explains that it took him two years to make this book, after first rejecting three other ideas. He describes his use of the “page-turn,” a technique that builds up the action across the page so the reader must turn the page to find out what happens next. The character sketches where he shares “messy” outlines of what will eventually become George are especially interesting and could inspire George-like dog drawings. He also includes photos of himself at work on the book while in Katmandu. Another thing he discusses is a quote by Epictetus on the title page—something I completely missed on my initial read and which perfectly captures George’s spirit.

Like his first book, A Bit Lost, which won nine awards in seven countries, Oh No, George! has won and/or been nominated for quite a few awards, including Germany’s Leipzig Book Fair Prize, 2-6 Category, and its 2013 White Raven Selection. It was France’s 2013 Je lis, J’élis (I read, I elect) Picture Book Award winner. In the U.K. and Ireland it was the Junior Magazine Picture Book of the Year and was nominated for the Roald Dahl Funny Prize, the UKLA Awards, the Irish Book Awards, the CLIP Carnegie Kate Greenaway Medal, the Waterstones Prize, the CBI Awards Ireland (Children’s Books Ireland), and the Conventry Inspiration Book Awards. In the U.S. it was the winner of the 2012 Little Awards for Book Books, Picture Book and Amazon.com’s 10 Picture Books of 2012. In Switzerland, it was nominated for the Carouge Story Book Award.

Haughton began his work as an illustrator for magazines and advertising, but “always wanted to write and illustrate my own children’s book.” Haughton credits the success of his picture book appeal to time he spent teaching English to youngsters in Hong Kong; there he used drama, role play, and illustration to create opportunities for the children to respond to the books he checked out from the school’s library. He says from this experience, he decided he wanted his books to be “theatrical and very visual,” he wanted them to involve humor and the desire to read and re-read, he wanted them to be “repetitive so that young children can join easily with the story,” he wanted the “images” to be read, and he “wanted visual symbolism” in his books. Kirkus described the illustrations in Oh No, George! as, “jazzy artistic style,” “minimalist,” with “geometric shapes and a striking palette of bold oranges, red and purple” and while I read a few reviews where the color palette was not appreciated, I think the colors add to George’s whimsical personality.

Comparing the writing and illustrations of his first book, A Bit Lost (2010), and his soon to debut third book, Don’t Worry, I Have a Plan, with Oh No, George! will lead to some interesting discussions about digital media and the elements of illustrations, such as overall composition, color, line, and shape. Other interesting pairings to talk about the characters and their antics might be: Marta Altés’s (2011) No!, Nick Bruel’s (2005) Bad Kitty, David Shannon’s (1998) No, David! and Gene Zion’s (2006, 50th anniversary edition) Harry the Dirty Dog. For added interest, I would want to show some of the YouTube videos Haughton references on his website—guilty dogs—they are just too funny and it’s easy to see how he incorporated these “guilty” dogs’ looks onto George.

After reading Oh No, George! and doing a little research on Chris Haughton, I’ve become a huge fan and you can bet I’ll be collecting his books from here on out.