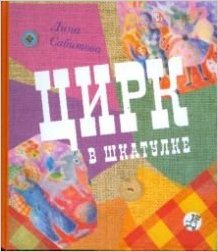 The Circus in the Treasure Box by a popular Russian children’s writer Dina Sabitova was published in Moscow in 2008 (Publishing House Samokat). In 2007 when the book was still in manuscript format, it received a prestigious Russian award, The Incredible Dream Award for Children’s Books. The main character of this book is a small boy named Marek, who is an orphan. Unlike many orphans in children’s books, he does not live in a horrible orphanage, nor does he sleep on the street, cold and hungry. He lives in a small foster home with just a few children and has his own room with pretty curtains on the windows. But despite such a nice place, there is the lack of something very, very important—the lack of love and a mother’s lullaby. Marek simply cannot stay there anymore and runs away.

Marek meets a traveling circus. This circus has everything – a juggler, a beautiful horse and her rider, a magician, and a kind ringmaster. The only one who is missing is a clown. But the respectable circus cannot exist without a clown. Marek helps his new friends to find a clown, a woman with the strange name of Treasure Box. Now they are ready to travel and perform in the capital city, but the city officials cancel the performances and put the ringmaster into the prison because the circus does not have a minister of culture permit to perform

In the capital, all entertainment is postponed until the princess finishes her math homework. This little princess soon becomes Marek’s best friend, even though they have not yet met. She lives in the king’s palace. Her mother and father call her Amelia “Caramellia.” She is very unhappy because her mother, a queen, who is also a minister of finance for the whole country, is so busy that she keeps forgetting to kiss the princess goodnight. The king is also terribly busy and forgets to remind the mother to kiss their daughter goodnight.

How to help the circus and the ringmaster? It takes two circus dogs, a donkey, a beautiful horse, one boy and one princess to figure it out. But it is not the end of the adventures of Marek and the princess. Even though the characters experience ups and downs in their quest for happiness and a place of acceptance, this book warms the reader’s heart. After all, its setting is a circus, a source of delight for most children.

Dina Sabitova is the author of several children’s books, including Tales about Martha (2011), No-Winter Land (2011), Your Three Names (2012), and Glikeria, the Mouse (2012). These works might be paired in an author study to look not only at characteristics of this author but cultural insights into the Russian audience for whom they are written.