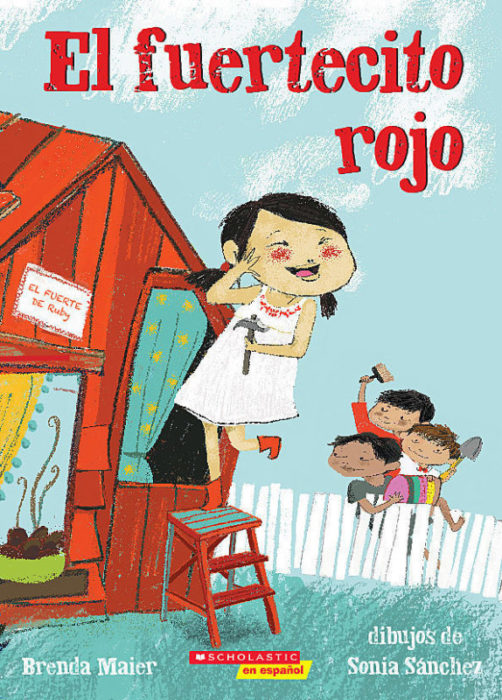 El fuertecito rojo is adapted from the traditional tale of The Little Red Fort and is available in both Spanish and English editions. Set in the U.S., the story begins with a young Latina girl named Ruby who has an incredible imagination for engineering and is prompted to use many household items to create inventions. These creations are also solutions to problems she encounters. As Ruby explores her home for projects, she comes across several old wood panels in her yard. Ruby poses a question to her brothers about who could help her construct a fort using those panels. She invites her brothers, Oscar Lee, Rodrigo, and José, but they are not interested in helping. Even though she asks her brothers at every point of the design process of the project, they still refuse to help her. Although her brothers refuse, the illustrations depict adult family members (perhaps her father, mother, and grandmother) helping Ruby with the fort. At the end of the story, Ruby asks her brothers if they would like to play in her fort and they agree. However, Ruby reminds her brothers that they did not help at any stage in the planning and construction of the fort and so she will enjoy it on her own. When the brothers realize the consequences of their lack of involvement in constructing the fort, they surprise her by creating additional items, such as a flower bed and a mailbox, and painting the entire fort red. Ruby realizes that her brothers should be granted the opportunity to enjoy the fort and invites them in.

The text and illustrations of this book are complementary to assist young readers in clearly comprehending the characters’ feelings and actions throughout the story where critical themes such as challenging gender norms, engaging in the engineering design process (EDP) and valuing the funds of knowledge (Gonzalez, Moll & Amanti, 2005) are central. The story challenges gender-related expectations by portraying Ruby as a young female who engages in innovation and problem-solving using STEM processes and practices. The narrative also highlights common gender-based struggles by depicting Ruby’s siblings as three male brothers who are inquisitive but constantly challenge Ruby’s knowledge and ability to construct a fort. The illustrations accurately depict the facial expressions and body language used throughout the story to show the brothers’ resistance to their sister’s ingenuity.

The text and illustrations also help readers understand the engineering design process (EDP), which requires 1) asking 2) imagining 3) planning 4) creating and 5) improving solutions to problems. The narrative builds as Ruby engages in every stage of constructing the fort and can help young readers understand the EDP in a developmentally appropriate way. The story also presents “building and construction” as a family fund of knowledge, which can help readers view STEM in an interrelated and transdisciplinary way. The illustrations capture Ruby learning and practicing these funds of knowledge by using tools and technologies with her family members. These family practices can strengthen a young readers’ imagination for STEM engagement. The illustrations show a culturally diverse and multigenerational family supporting STEM activities. This support is depicted through the father, mother, and grandmother as experts who are present in our homes and hold cultural and linguistic knowledge that can lead young readers to develop socially conscious and culturally relevant ways to engage in STEM learning.

A text that extends a young reader’s interest in STEM and is complementary to El fuertecito rojo is the story Dreaming Up: A Celebration of Building by Christy Hale (2012), focusing on how young children can construct or build in ways that support their imagination and develop problem-solving approaches through creativity and exploration. A culturally relevant text that extends Maier and Sanchez’s work is My Very Own Room/Mi propio cuartito by Amada Irma Pérez (2008). In this bilingual book, a young Latina’s family helps her construct a space for privacy to read her favorite books. Like Ruby, she demonstrates her STEM approach using household technologies to construct her own room.

Brenda Maier is an author and a gifted and talented education specialist whose storytelling is inspired by her five children. Brenda observed them building a fort which led her to adapt the folktale of The Little Red Hen. She lives in Oklahoma, U.S.

Sonia Sánchez, born in Spain, is an award-winning illustrator who uses traditional and digital brushes to provide texture in her paintings to evoke emotion and actions. She has received twice the Society of the Illustrator Original Art Show award and was nominated for an Eisner Award.

WOW Review, Volume XIV, Issue 2 by Worlds of Words is licensed under a Creative Commons Attribution-NonCommercial-ShareAlike 4.0 International License. Based on work by Esther Garza at https://wowlit.org/on-line-publications/review/xiv-2/3/