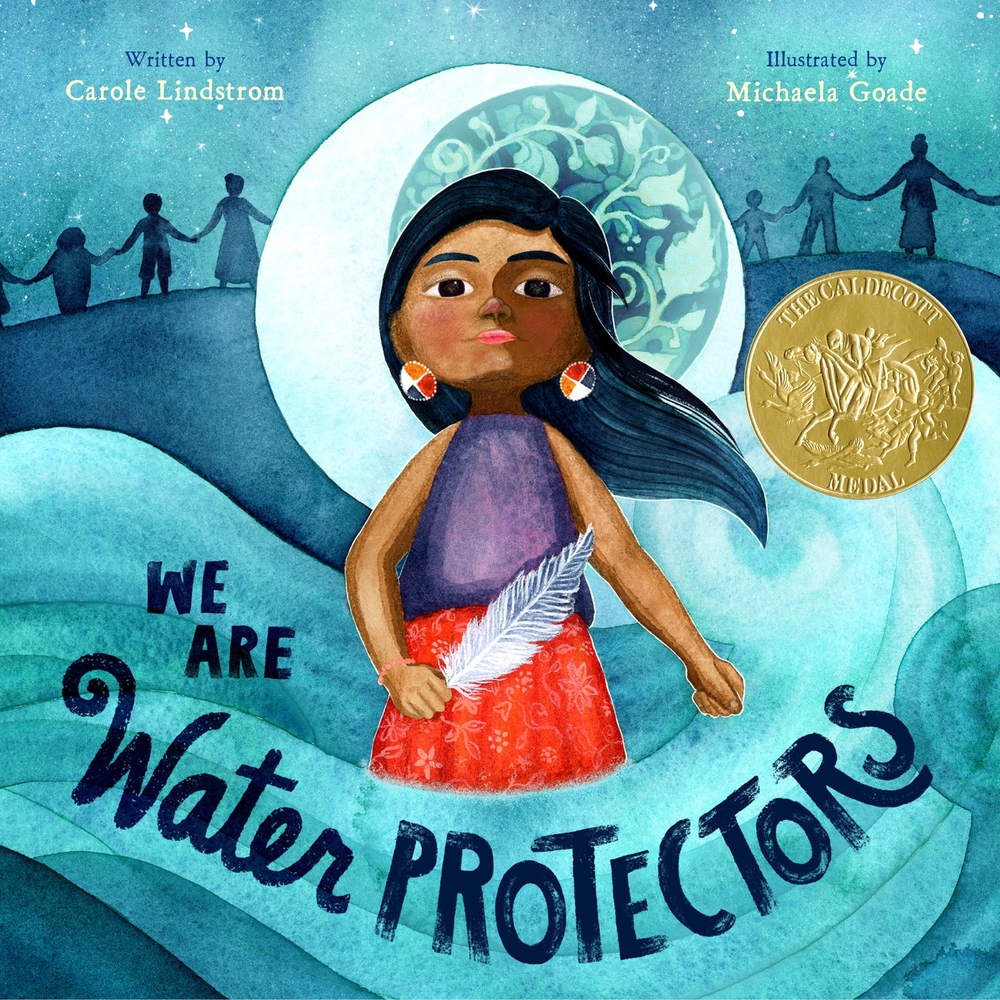 An Ojibwe girl, surrounded by hues of blue to symbolize water, represents the resilience of the people standing together, hand in hand, behind her. The bold colors grab the reader’s attention and compel them to keep reading. We Are Water Protectors tells the story of a young girl and her community fighting for the protection of their natural environment. As the story begins, we see multiple women collecting water from a river. The image of a grandmother teaching her granddaughter about the importance of water is depicted next to the women. This book was written to raise awareness about the struggle and resilience of Native populations in relation to earth’s wonders. In Ojibwe culture, children are taught at a young age that they come from water as well as how “water is the first medicine” and it deserves to be protected and respected (Author’s Note). They learn of a “black snake” that will be the cause of harm towards their land. The snake that is discussed symbolizes oil pipelines installed in paths that will bring destruction and harm to Mother Earth. Throughout the book, communities come together toward the common goal of protecting nature and getting rid of this snake before it does any harm.

In 2016, one of these “black snakes” was an issue at hand. The Dakota Access Pipeline wanted to install these lines in a region with burial grounds and water sacred to the Standing Rock Sioux Tribe in the Dakotas (Wehelie, 2016). Natives were weary of oil leaks that cause damage to wildlife, water, and plants in the region. At first, only a few residents camped out in protest of these pipelines, but it soon turned into a movement that brought together over five hundred Indigenous Nations to stand up and fight for clean water.

This story is brought to life through the colorful watercolor illustrations. Each image enhances the narrative of protecting nature. The different hues of blue, purple, green, orange, and black, bring Mother Nature to life and depict how the darkness from the black snake can quickly deteriorate its beauty. The illustrations in this colorful narrative show a young girl fighting for those who cannot fight for themselves: “the winged ones, the crawling ones, the four-legged, the two-legged, the plants, trees, rivers, lakes, the earth.” She stands alongside her community to protect the natural environment at a time where technological advancement is viewed as more important. This timeless tale can be used to teach about Indigenous activism as well as environmental justice (Cappielo, 2021).

We Are Water Protectors involves activism, culture, and the environment as some of its key themes. The Boy Who Grew a Forest: The True Story of Jadav Payeng (Sophia Gholz and Kayla Harren, 2019) is a similar read that includes environmental activist themes. It follows the story of this young boy who wanted to make an impact against the deforestation occurring in his home in India. Another similar read, The Lorax (Dr. Seuss, 1971), tells the story of how the Once-ler learns the importance of the trees and the consequences that come from deforestation.

Author Carole Lindstrom was born and raised in Nebraska as Anishinaabe/Métis and is enrolled in the Turtle Mountain Band of Ojibwe. In the Ojibwe culture, women are known for being the protectors of water, which is greatly shown in this narrative. In the Author’s Note, Lindstrom explains that “this book was created as I became increasingly aware of the many tribal nations that are fighting oil pipelines from crossing their tribal lands and waterways.”

Illustrator Michaela Goade is of Tlingit descent and is tribally enrolled in the Central Council of the Tlingit and Haida Indian Tribes of Alaska. She has won many awards for her mesmerizing illustrations, including the 2018 American Indian Youth Literature Best Picture Book Award for Shanyaak’utlaax: Salmon Boy and the Caldecott medal for We Are the Water Protectors. She is the first Indigenous illustrator to win this prestigious award. Her illustrations reflected the significance of traditional teachings in the Ojibwe/Anishinaabe culture. To portray the Ojibwe culture throughout the story Goade had the young girl, the protagonist; change into a traditional ribbon skirt when rallying the people.

WOW Review, Volume XIV, Issue 2 by Worlds of Words is licensed under a Creative Commons Attribution-NonCommercial-ShareAlike 4.0 International License. Based on work by Esmeralda Cartagena Collazo at https://wowlit.org/on-line-publications/review/xiv-2/9/