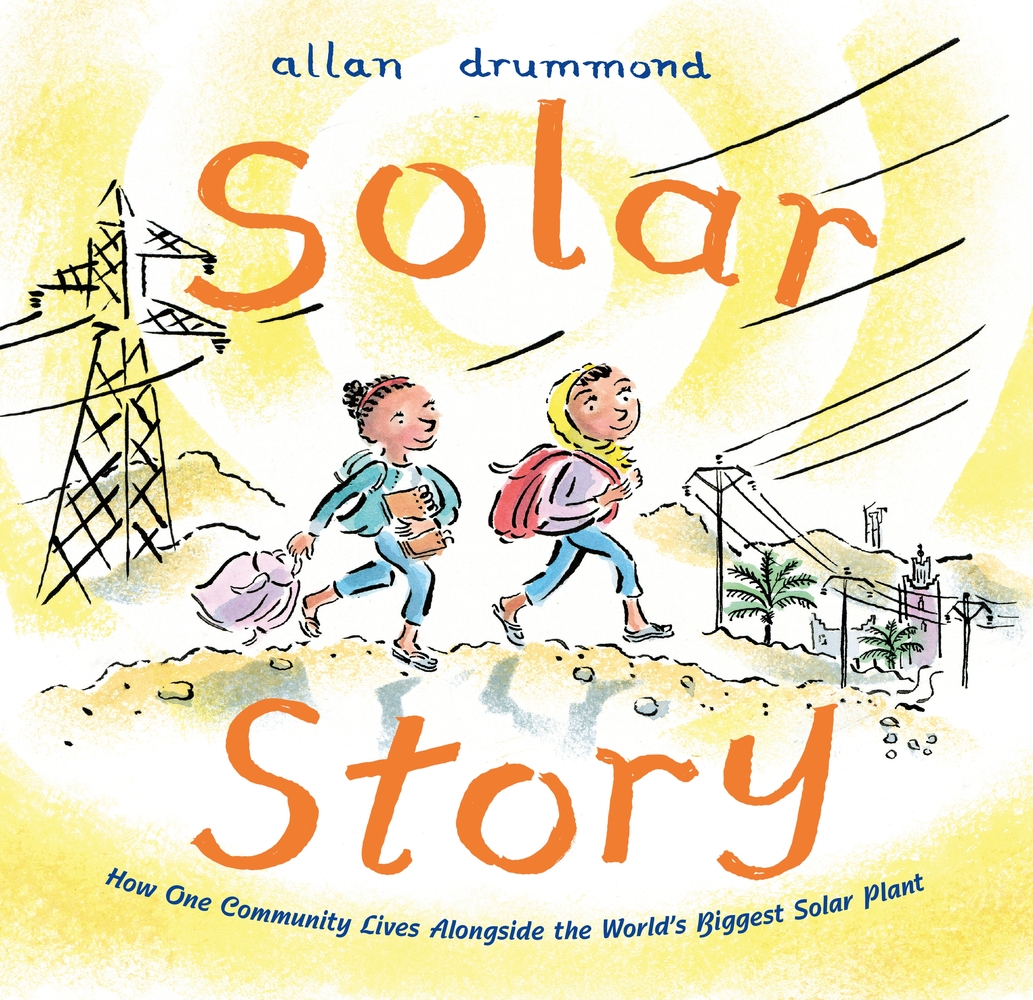 Readers are transported to Ghassate, one of the villages on the edge of the Sahara Desert in central Morocco, near the world’s largest solar power plant. Life in this Berber community has not changed much over the centuries. Families work together to farm palms, almonds, and other crops to feed themselves and their animals. But the construction and operation of the Noor solar power plant is changing village life. Jasmine and Nadia are two classmates preparing to take a field trip to the nearby plant, so their teacher, Miss Abdellam, asks them big questions about solar energy and sustainability. During their visit, readers learn about the four phases of the plant, the 660,000 computerized mirrors following the path of the sun, and the different photovoltaic methods of concentrating the energy and collecting it in the solar towers. Later, as students reflect on their visit, readers learn how much village life is changing. The story concludes with Nadia’s hope for one more change, access to the internet while in school.

Through the story of the power plant, Drummond invites readers to think about energy usage but also about change. As the girls do their homework and think about their field trip, they realize that the power plant has impacted sustainability in many ways besides using renewable energy instead of non-renewable fossil fuels. Better roads have given access to education that improves agricultural knowledge and increases crop yields and herd health. Training workers to build the plant structures gives skills that they can turn into small businesses (e.g., welding) that create jobs for others. Access to better health care increases life expectancy. The college built near the power plant offers education to learn manufacturing skills with wood, clay, and fabric. Drummond uses a sidebar to summarize what the girls realize and the Moroccan Agency for Sustainable Energy planned: the plant has impacted the “farms, wildlife, businesses, leadership, and culture of the communities nearby” but in a way that allows remote villages to thrive (p. 27). The changes from the construction of the power plant are positioned as positive by both the author and the characters even though the narrative and author’s note acknowledge how profound the changes have been for this rural area.

Possible book pairs include Drummond’s other books in this series that emphasize creative conservation measures in communities. Energy Island (2011) describes how the Danish island of Samsø invested in and uses wind energy for its power needs. Green City (2016) explains how Greensburg, Kansas, was rebuilt after a tornado destroyed most of the town. Greensburg townspeople decided to rebuild green, so they used conservation techniques to save water, used renewable energy sources like solar and wind power, and built circular structures to minimize future wind destruction. Pedal Power (2017) describes the grass roots movement to provide safe bicycle lanes in Amsterdam in the Netherlands, revolutionizing traffic patterns that kept people safer and reduced pollutants. Other possible book pairs include Molly Bang’s My Light (2004) and the other titles in the Sunlight Series, written in collaboration with MIT biology professor Penny Chisholm: Living Sunlight (2008), Ocean Sunlight (2012), Buried Sunlight (2014), Rivers of Sunlight (2017). The books describe the interconnectedness of life with solar energy.

Alan Drummond is from Suffolk, England. He originally worked as a reporter but then studied illustration at the Royal College of Art where Quentin Blake was one of his tutors. After spending time in the U.S., he returned to England where he currently lives with his family. His concern for sustainability is evident through the energy titles he has written, and the careful research he does is described in the back matter. In the author’s note in Solar City, he encapsulates what he learned in his statement, “solutions to our energy and sustainability challenges can be found everywhere and require a global perspective from the start.” So, he profiles wind energy in Denmark, solar power in Morocco, human pedal power in Amsterdam, and green energy in Kansas. More information about his picturebooks and artwork can be found on his website.

WOW Review, Volume XIV, Issue 2 by Worlds of Words is licensed under a Creative Commons Attribution-NonCommercial-ShareAlike 4.0 International License. Based on work by Susan Corapi at https://wowlit.org/on-line-publications/review/xiv-2/7/