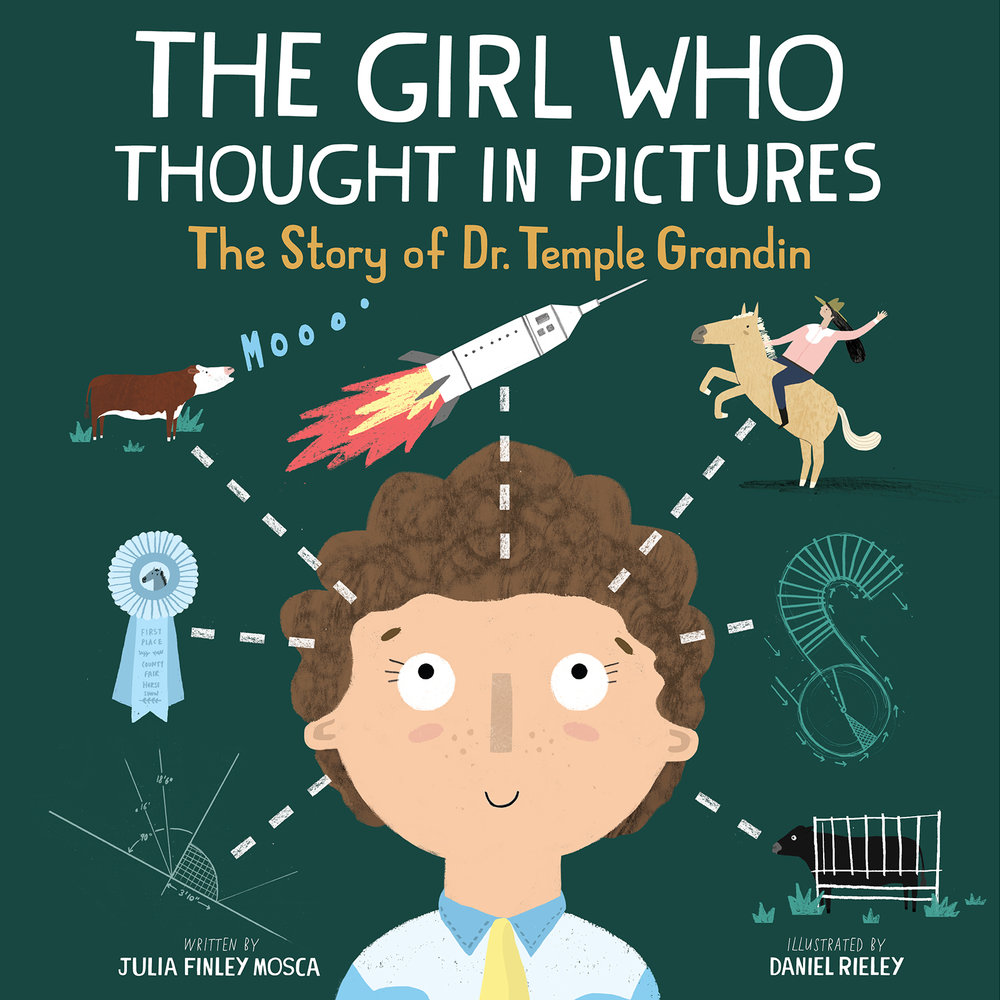 The Girl Who Thought in Pictures: The Story of Dr. Temple Grandin
Written by Julia Finley Mosca
Illustrated by Daniel Rieley
The Innovation Press, 2017, 40 pp
ISBN: 978-1943147304

“Parents get so worried about the deficits that they don’t build up the strengths, but those skills could turn into a job.” (www.templegrandin.com)

Have you ever felt an overwhelming frustration when trying to get someone to understand what you want to communicate or where you are coming from regarding your thinking and actions? It all makes complete and perfect sense to you. How can anyone not understand? That is how everyday felt to Temple Grandin as a young white child born in Boston, Massachusetts. She was bullied, made fun of, misunderstood, and sent away because those around her could not understand her. Temple was diagnosed with autism at an early age. Luckily, she crossed paths with a mentor who encouraged her and motivated her to figure out her strengths instead of focusing on her struggles. She became interested in science and animals. She understood animals and animals understood her. She later invented a new apparatus for farming (curved chute system for cattle) and went on to earn multiple college degrees despite her challenges. She persevered and overcame the labels that society placed on her. She succeeded. After the story, readers can learn more about Dr. Temple Grandin by visiting the author’s “Fun facts and tidbits from the author’s chat with Temple” timeline, and “About Dr. Temple Grandin” biography.

The story focuses on strengths in individuals and situations and how to overcome challenges and struggles. The narrative is in playful poem fashion with stanzas packed with imagery, feelings, and emotions. The illustrations do a fantastic job of highlighting Temple throughout the story. The adults and other children in the story are drawn as if in zoom with the majority of their bodies off the page, creating a feeling of isolation for Temple. She is different and not included. However, when the images include animals, they are shown full body. She is a part of them and they are a part of her. Mostly, colors of nature and animals are shown throughout the illustrations with some red and orange in the mix to depict anger and frustration. The stairway is symbolic and representative of the obstacles that Temple must overcome to be a part of the world that surrounds her.

With the growing need for the portrayal of women and those with disabilities/struggles, this book would be a wonderful read aloud to tie into both social justice and social emotional learning lessons within the classroom. Other relevant books that pair well with Temple Grandin’s story are Malala Yousafzai: Warrior with Words (Karen Leggett Abouraya and Susan Roth, 2018), which tells the story of Malala Yousafzai who is a fearless proponent of the right for education for women. Another pairing would be Sonia Sotomayor: A Judge Grows in the Bronx (Jonah Winter, 2009), which depicts the story of Sonia Sotomayor who rises above oppression and her socioeconomic class to become the first Latina Supreme Court Justice. Finally, Susan Laughs (Jeanne Willis and Tony Ross, 1999), beautifully captures the many normal everyday things that Susan does, not revealing until the very end that Susan has a disability.

Julia Finley Mosca knows a bit about writing and crafting messages to make an impact. She spent much of her career as a copywriter and journalist. She also worked for renowned companies such as Yahoo! and American Greetings. She has several books highlighting important successes in STEM related fields, such as The Doctor with an Eye for Eyes: The Story of Dr. Patricia Bath (2017), The Girl with a Mind for Math: The Story of Raye Montague (2018), and The Astronaut with a Song for the Stars: The Story of Dr. Ellen Ochoa (2019). Not only are Mosca’s books a refreshing historically rare portrayal of women doctors and scientists, but she also highlights the successes of multicultural women.

Daniel Rieley is an illustrator from London, England. He loves to travel and explore the world and nature. He has illustrated all of the above-mentioned books by Mosca. He utilizes different media in his work such as ink, pencil, and watercolor. More information about Julia Finley Mosca and Daniel Rieley can be found at https://www.amazingscientists.com/authorillustrator

WOW Review, Volume XIV, Issue 2 by Worlds of Words is licensed under a Creative Commons Attribution-NonCommercial-ShareAlike 4.0 International License. Based on work by Sarah Pittmon at https://wowlit.org/on-line-publications/review/xiv-2/4/