Yesterday I drove sixty miles west to attend a meeting on another campus. As I drove, I thought about the borders I was crossing — boundaries between one school district and the next, streets that marked the difference between one town and another, a county line announced by a road sign and a change in pavement. I also paralleled the U.S./Mexico border; when I arrived at the town where the campus is located one left turn would have sent me to the bridge across the Rio Grande River and into Mexico.

Borders are everywhere! But why? What purpose do they serve? How are they established? Who benefits from them? Who is harmed? 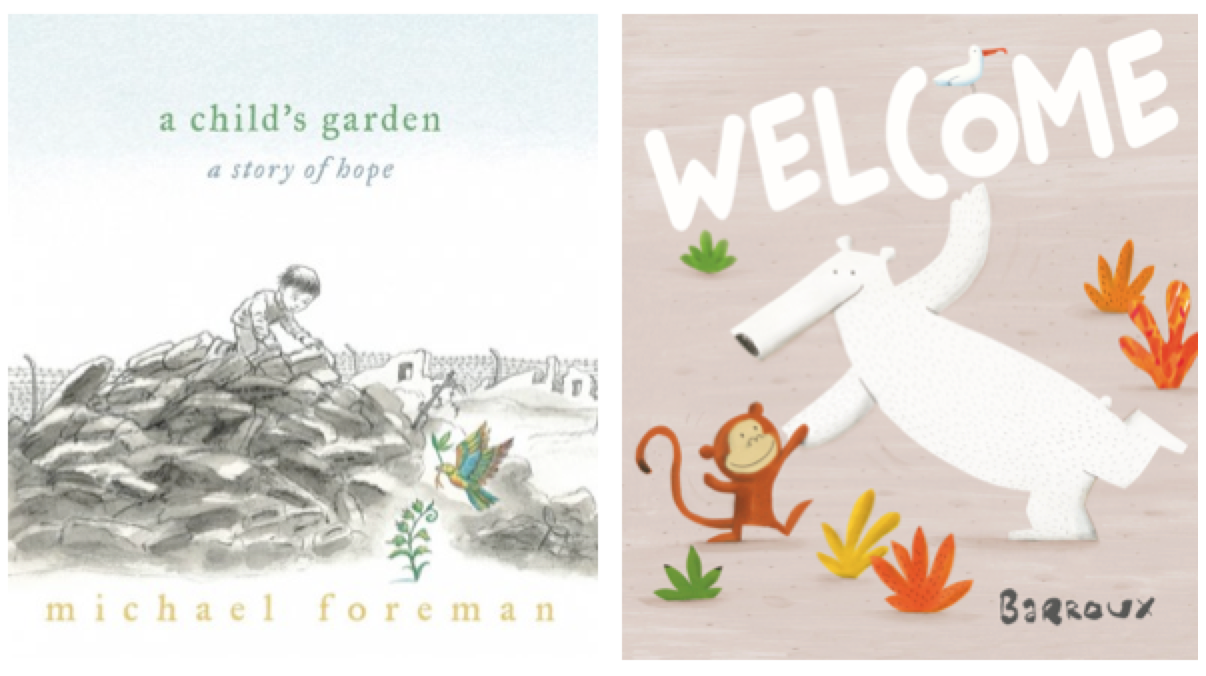 Borders are created by people and are not natural phenomena. As such, they can be examined, critiqued, confronted and crossed. However, we need to provide children with support for their thinking about borders. Children’s literature can be a way to initiate discussions about geographic borders.

While borders can fall at natural geographic features such as rivers or mountain ridges, often they are marked by a man-made, physical barrier that stops or controls who can move from one side to the other. In The Chickens Build a Wall by Jean-Francois Dumont, the chickens decide that they need a wall to protect the henhouse from a strange hedgehog who has wandered into the farmyard. Although other animals mock them for their paranoia, the chickens work diligently to build “a wall so high that no wild animals will be able to get over it. So high that even birds won’t be able to fly over it!” They are locked away behind their wall — they’ve forgotten to build in a door — when they realize that they have inadvertently shut the hedgehog in with them. By the time the chickens can dig a way out of the henhouse, they’ve learned to live with the hedgehog. The final spread shows the animals together in the farmyard with the wall in pieces around them. Children might explore the reasons the chickens wanted the wall. Were they valid concerns? Could they have been addressed some other way?

Not all walls are so easy to dismantle as the one the chickens constructed. The little boy in A Child’s Garden: A Story of Hope, by Michael Foreman, lives on the wrong side of a tall, barbed wire fence, surrounded by the ruins of his town. When the boy finds a speck of green amongst the rubble, he nurtures the growing grapevine until it matures into a great garden, spread out along both sides of the fence. Then soldiers come and tear down the vines, destroying the green, lush garden and breaking the little boy’s heart. Yet, hope remains, because after a cold and dismal winter, the vine begins to sprout again, this time nurtured by a small girl on the other side of the fence. Children might wonder why the soldiers tore down the grapevine and could be encouraged to think about what they might do to nurture hope.

Of course, people cross geographic borders all the time, even when the border is specifically designed to control or limit movement. There are a number of wonderful children’s books about migrant and immigrant experiences. Two that I’d like to highlight here are Migrant by Jose Manuel Mateo and Two White Rabbits by Jairo Buitrago. Migrant is an English/Spanish bilingual book, published in the form of a codex with a fantastic, detailed continuous illustration that runs throughout the entire text. It shares the story of a young boy and his mother who travel north across the border in order to find work. I suggest pairing this book with Two White Rabbits, which shares similarities in plot and theme. Children might compare the journeys in the two books and question what would set a parent and child on such a difficult road. They might also wonder why the task was so difficult. Why is the border hard to cross? Who made it that way? What purpose does it serve?

Many geographic borders are designed to control the movement of people, goods and/or ideas, and so the borders require permission or documentation of some sort. When this permission is overly burdensome or impossible to obtain, some people will take the risk and cross anyway. Mama’s Nightingale: A Story of Immigration and Separation by Edwidge Danticat shows one such family. Saya’s mother, a Haitian immigrant, is undocumented and has been sent to a detention center while her father frantically tries to get her papers sorted out. Saya desperately misses her mother and eventually writes to newspaper reporter asking for help. The publicity helps get her mother released so that she can wait at home until her legal situation is fixed. While the ending is a bit unrealistic, Mama’s Nightingale can help children think about and question what can happen to undocumented immigrants. What are the rules about who can enter a country and who can’t? Who makes these rules and why?

Some people who cross borders do so because they are fleeing violence or war. Refugees are not a new phenomenon, but have been increasingly in the media given the conflict in Syria. Several recent children’s books take on the topic of refugees. Welcome by Barroux is a great book for young children. Cartoonish illustrations and simple text tell the tale of three polar bears who have to find a new home when theirs is destroyed. After being turned away from island after island, they finally find a welcoming place to live. Slightly older children will enjoy The Journey by Francesca Sanna, which chronicles the arduous migration of a family fleeing war. These books may lead children to question why refugees are welcomed some places but not others.

Finally, I want to highlight Stepping Stones: A Refugee Family’s Journey by Margriet Ruurs. This book uses bilingual English/Arabic text and spare, expressive illustrations created out of small stones to tell the story of one family’s grueling journey out of war-torn Syria to safety. Author Margriet Ruurs came up with the idea for the book after seeing one of Nizar Ali Badr’s stone artworks on Facebook. She learned that he is a Syrian artist who works in this surprisingly sensitive medium. With much effort, Ruurs was able to contact him and together they created this amazing story of hardship and hope. Children will be fascinated by the artwork, but will also be able to explore the refugee experience and make connections with current events.

There are many other books about borders and barriers, immigrants and refugees. Please use the comment box to suggest good additions to the books I shared in this post!