Graphic novels are entertaining for teachers and students. Lately we see more teachers adopt graphic novels in their classrooms. Manga may not be the same. Manga have a wide range of volume numbers and often have long series. Many teachers may not be able to monitor the entire volume sets in their busy schedule. We wonder what will happen if manga are mixed with other children’s books, specifically culturally diverse books. I, Yoo Kyung, often observe that students don’t always grab multicultural books when they have other choices (even in Albuquerque, “the Land of Enchantment”.) Book covers with different ethnic groups are not always their passion. Mixing manga within a text set may interest students in multicultural books through common themes and topics, not by category of “diverse” books. Intertextuality pursued by themes and topics attract students to read. 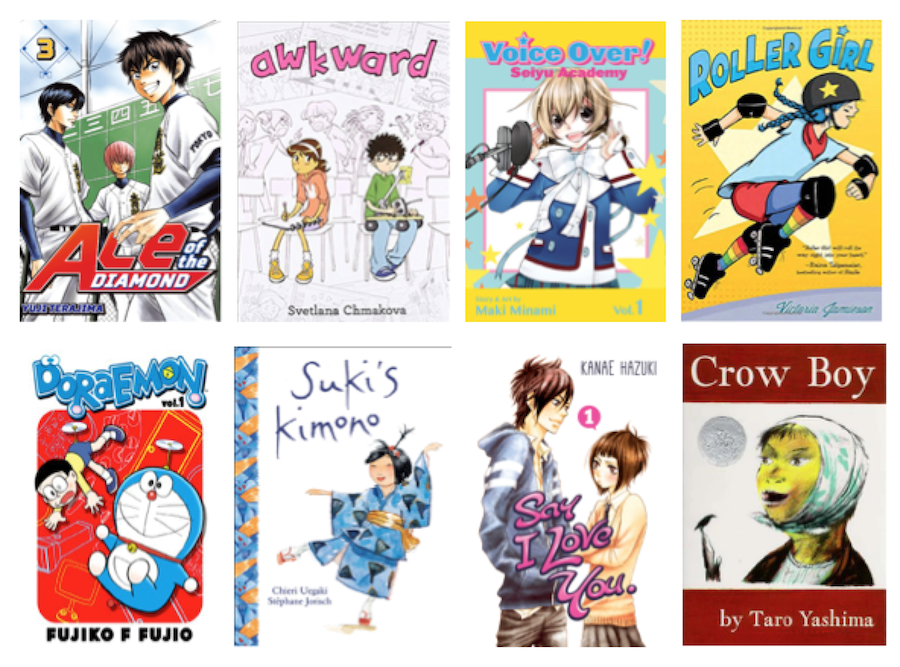 This week we share text sets, including Japanese manga that we discussed in the last four weeks, along with culturally diverse books. In these mixed text sets, we bridge one of the most popular themes in manga for young people: children and youth’s agency.

Children and youth’s agency are a significant part of childhood and youth cultures. They are often represented in manga and in culturally diverse literature. Children and youth share activities, artifacts, values, and concerns with peers in various social circumstances. Childhood landscapes (i.e. schools, playgrounds, neighborhoods, after school programs, shopping malls, digital spaces etc.) are where they share peer experiences. Through these peer experiences, they develop a sense of agency — they reflect, pose problems and take action to solve problems for themselves and peers (Short, 2017). In our text sets, sharing values through activities is found as a sub-theme. They seek and develop their identities and build peer relationships in mixed genre. We encourage teachers to utilize these textsets in various classes. We combine manga with other strong culturally diverse books in three large sub-themes below.

Sharing Values through Activities: Children and youth grow collective and individual interests by sharing values in sports, art, music and drama performances in and out of school. Through these peer experiences, they develop a sense of agency and think and act proactively.

Seeking and Developing Identities: Young people’s affirmation of personal and cultural identities increases self-awareness and self-esteem. It helps them to gain agency through wide ranges of interpersonal relationships with peers, family members and community members.

Building Peer Relationships: Children and youth build a sense of agency through supportive peer relationships in the face of difficulties. Peer relationship themes are in various spaces in young people’s lives.

From kindergarten years, students lose their playtime as a consequence of “not doing well” in school. Tight schedules and their status in school create stressful school cultures for children. We both worry — what if school cultures in the U.S. become similar to our own schooling years in Korea and Japan, where test scores decide what students need and who students are?

Young people are strong. They still find resilience to survive school pressure. Like many Korean and Japanese students, they still find breathing time through reading like manga and web-toons. Perhaps young readers in your school find resilience even though assessment results affect their school life. Redefine a fun time — reading manga may be like a literary recess to your students. It’s actually a wonderful discovery for “the assessed”: children, tweens, and adolescents.