Explore the past 150 years in what is now Canada through the eyes of Indigenous creators in this groundbreaking graphic novel anthology. Beautifully illustrated, these stories are an emotional and enlightening journey through indigenous wonderworks, psychic battles, and time travel. See how Indigenous peoples have survived a post-apocalyptic world since Contact.

In this picture book based on A Long Walk to Water, a young South Sudanese girl goes on a journey that requires determination, persistence, and compassion.

As a child, Simon Jackson found navigating the world of the school playground difficult. He felt most at home in the woodlands, learning about and photographing wildlife. As a teenager, he became fascinated with spirit bears, a rare subspecies of black bear with creamy white fur. These elusive creatures were losing their habitat to deforestation, and Simon knew he had to do something to protect them. He decided he would become the voice for the spirit bears. But first, he would have to find his own.

The star of Orange Is the New Black and Jane the Virgin, Diane Guerrero presents her personal story in this middle grade memoir about her parents’ deportation and the nightmarish struggles of undocumented immigrants and their American children. 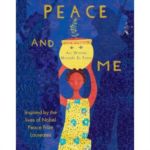 What does peace mean to you? This collection of inspirational ideas about peace is based on the lives of Nobel Peace Prize Laureates of the 20th and 21st centuries, among them Nelson Mandela, Martin Luther King Jr., Mother Teresa and Malala Yousafzai.

The true story of nineteen-year-old Jordana Lebowitz’s time at the trial of Oskar Groening, known as the bookkeeper of Auschwitz, a man charged with being complicit in the death of more than 300,000 Jews. A granddaughter of Holocaust survivors, Jordana attended the trail. She realized that by witnessing history she gained the knowledge and legitimacy to be able to stand in the footsteps of the survivors.

Dashrath Manjhi used a hammer and chisel, grit, determination, and twenty years to carve a path through the mountain separating his poor village from the nearby village with schools, markets, and a hospital. Manjhi Moves a Mountain shows how everyone can make a difference if their heart is big enough.

Miriam Makeba, a Grammy Award–winning South African singer, rose to fame in the hearts of her people at the pinnacle of apartheid―a brutal system of segregation similar to American Jim Crow laws. Mama Africa, as they called her, raised her voice to help combat these injustices at jazz clubs in Johannesburg; in exile, at a rally beside Dr. Martin Luther King, Jr.; and before the United Nations.

When her mother is jailed for being one of Gandhi’s freedom fighters, ten-year-old Anjali overcomes her own prejudices and continues her mother’s social reform work, befriending Untouchable children and working to integrate her school.