High on a cliff above the gloomy Victorian town of Withering-by-Sea stands the Hotel Majestic. Inside the walls of the damp, dull hotel, eleven-year-old orphan Stella Montgomery leads a miserable life with her three dreadful aunts.

On an island off the south coast of Victorian England, fourteen-year-old Faith investigates the mysterious death of her father, who was involved in a scandal, and discovers a tree that feeds upon lies and gives those who eat its fruit visions of truth. 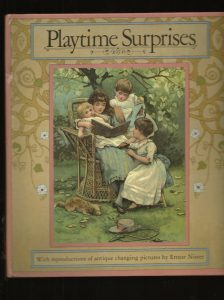 As children play with their dolls, toys, and pets, in a number of poems, the reader may pull tabs to reveal playtime surprises.

A fantastic Steampunk adventure in the deeps. Transforming his appearance and stealing secret documents from the French is all in a day’s work for fourteen-year-old Modo, a British secret agent. But his latest mission—to uncover the underwater mystery of something called the Ictneo—seems impossible. There are rumors of a sea monster and a fish as big as a ship. French spies are after it, and Mr. Socrates, Modo’s master, wants to find it first. Modo and his fellow secret agent, Octavia, begin their mission in New York City, then take a steamship across the North Atlantic. During the voyage, Modo uncovers an astounding secret. The Dark Deeps, the second book in Arthur Slade’s Hunchback Assignments series, is set in a fascinating Steampunk Victorian world. Modo’s underwater adventures and his encounters with the young French spy Colette Brunet, the fearless Captain Monturiol, and the dreaded Clockwork Guild guarantee a gripping read filled with danger, suspense, and brilliant inventions.