Three runaway teenagers are chased in a road trip from the Texan frontera to New England, by a drug cartel planning to unleash chaos unto the country. Seventeen year old Turi escapes from his abusive family by reading. He hopes to actually escape by saving up from his work at a chicken farm near Ysleta, Texas. He believes the beautiful setting of his favorite book, Connecticut, will be the perfect home for him. So Turi sets off on the road with Arnulfo-an undocumented teenager he met at the farm, and Molly-a lonely girl looking to build a better life. The boys start their trip by hitching a ride with an elderly man, but they leave him behind and steal his truck when they begin to suspect he’s in the middle of an illicit operation, and hiding a dangerous secret. Unfortunately for the three runaways, the secret is hidden in the truck and results in a drug cartel chasing them down, the release of a virus, and the total breakdown of society around them.

The second book in the series, The Merciless Ones follows Deka after she’s freed the goddesses of Otera and discovered who she really is…but war is waging across the kingdom, and the real battle has only just begun. For there is a dark force growing in Otera—a merciless power that Deka and her army must stop.

Yet hidden secrets threaten to destroy everything Deka has known. And with her own gifts changing, Deka must discover if she holds the key to saving Otera… or if she might be its greatest threat.

Riley Oh ventures into the Spiritrealm, where she hopes to convince Saint Heo Jun to become the new patron god of the Gom clan and restore their healing powers.

After his augmented reality gaming headset is possessed by the spirit of the First Emperor of China, twelve-year-old Chinese American Zack Ying is compelled to travel across China to steal an ancient artifact, fight figures from Chinese history and myth, and seal a portal to prevent malicious spirits from destroying the human realm.

“Razi, a local fisherboy, is watching turtle eggs hatch when he sees a boat bobbing into view. With a chill, he notices a small, still hand hanging over the side. Inside is Zheng, who’s escaped a shipwreck and is full of tales of sea monsters and missing treasure. But the villains who are after Zheng are soon after Razi and his sister, Shifa, too! And so begins an exhilarating escapade in the shadow of the biggest sea monster of them all”

The Pandavas call on old friends, make new allies, and face fearsome trials as they embark on a mission to stop the Sleeper from accessing the nectar of immortality, but ultimately Aru must decide who deserves immortality–the devas or the asuras–and an unexpected answer comes from an unexpected place.

With the help of her friends, fifteen-year-old Sunny embarks on a mission to find a precious object and return it to the spider deity Udide, but defeating the guardians of Udide’s ghazal will put all of Sunny’s hard lessons and abilities to the test.

In this retelling of the Korean legend The tale of Shim Cheong, sixteen-year-old Mina is swept away to the Spirit Realm, where, assisted by a motley crew of demons, gods, and lesser spirits, she sets out to awaken the sleeping Sea God and save her homeland and family from deadly storms. 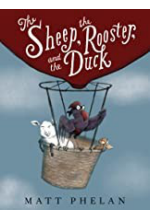 In 1783 France, ten-year-old Emilie works as Benjamin Franklin’s caretaker, but after he finds himself in the middle of a sinister plot, he helps France’s undercover guardians, a sheep, a roster and a duck save the world.

Thirteen-year-old nonbinary tiger spirit Sebin must decide where their loyalties lie when their traitorous uncle hijacks the battle cruiser that happens to be Sebin’s first assignment in the Cadet Program.