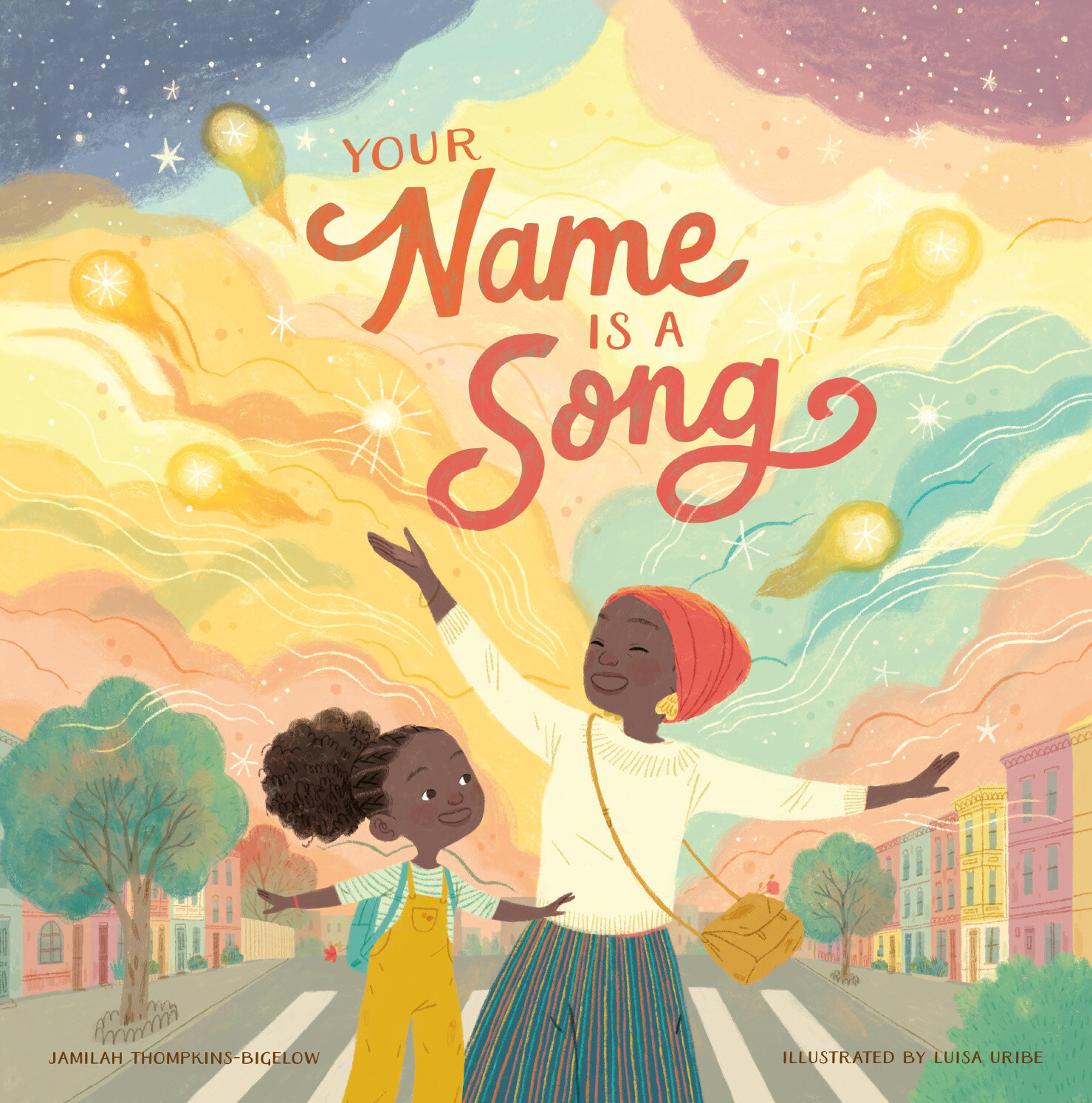 A young Black Muslim girl does not want to return to school after her first day because her U.S. teachers and classmates are unable to say her West African name. For every terrible moment the girl endures with her name, her mother has a counter approach to viewing the musicality of names and the power of taking pride in one’s name as an integral part of cultural identity. She uses examples of names from Middle Eastern, African, European, Asian, Latinx, and Black-American cultures. Kora-Jalimuso learns that names are powerful and sings her own and her classmates’ names at roll call the next morning.

Luisa Uribe’s vibrant colored illustrations perfectly compliment Jamilah Thompkins-Bigelow’s lyrical text. As Kora-Jalimuso’s mother describes the musical and powerful nature of names, the pictures breathe magic into the girl’s day. Magical elements, such as fire and sparks, continue to curl, grow, and expand. The city disappears, and the girl and her mother walk in the clouds, pulling names from the sky. The illustrations return to the city when the girl must return to school, but the magic returns as Kora-Jalimuso sings everyone’s names. Her classmates represent a diverse group of children, both in appearance and in name.

In an interview with Jon Schu (2020), Jamilah Thompkins-Bigelow revealed that the main character’s name in Your Name is a Song was inspired by traditions from her mother’s Mandigo griot and her father’s Black-American cultures. “Kora-Jalimuso” means “harp of a female griot” with a griot in West Africa being someone who sings an oral history. This name and description are featured in a glossary of names at the back of the book. The glossary contains all of the names used throughout the book along with their common pronunciation, origin, and meaning.

Your Name is a Song is featured on numerous best picturebook lists, including the Black Caucus of the American Library Association and multiple state lists. To discuss names as part of cultural identity with children, Your Name is a Song can be paired with The Name Jar (Yangsook Choi, 2001) and Alma and How She Got Her Name (Juana Martinez-Neal, 2018). The book can also be paired with “My Name,” an excerpt from The House on Mango Street (Sanda Cisneros, 1983) when working with children for a deep discussion on name meaning and cultural identity.

Jamilah Thompkins-Bigelow is an educator and writer who focuses on Black and Muslim children in her writings. She currently resides with her family in Philadelphia. Luisa Uribe is an illustrator with a graphic design degree from the National University of Colombia and an MA in art and design from Loughborough University. She lives in Bogotá where she works primarily on picturebooks.

Reference
Schu, J. (2020, June 13). Your name is a song by Jamilah Thompkins-Bigelow and Luisa Uribe. Retrieved from http://mrschureads.blogspot.com/2019/10/your-name-is-song-by-jamilah-thompkins.html

WOW Review, Volume XIII, Issue 3 by World of Words is licensed under a Creative Commons Attribution-NonCommercial-ShareAlike 4.0 International License. Based on work by Ashley Wagnon at https://wowlit.org/on-line-publications/review/volume-xiii-issue-3/12/