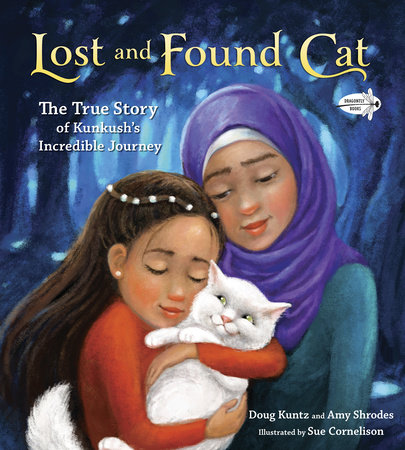 This heartwarming story is inspired by the true story of a cat that is lost during the journey of a refugee family. The family is forced to flee from Mosul, Iraq, and escape to a safer country. They leave behind almost everything, but cannot bear to leave their beloved cat, Kunkush. They risk carrying him through all the stages of their journey from Iraq to Greece and keep him hidden from the smugglers and other passengers. When they arrive in Greece, unexpectedly Kunkush escapes from the broken cat carrier and disappears. Family, volunteers and everyone on the beach search for Kunkush. Unfortunately, the family has to continue their journey without him.

After the family leaves Greece for Norway, Amy, a volunteer in Greece finds Kunkush. Amy desperately wants to reunite the family with him so takes the frightened cat to the vet, cares for him, and gives him a name. The community and other volunteers collaborate to help Amy by posting on Facebook and other social media attempting to find Kunkush’s family. After a few months of searching, the family is found and are able to see Kunkush through a Skype video call. Photojournalist Doug Kuntz offers to take him to the family. However, at the airport, Kunkush is not allowed to travel with Doug because of the size of his carrier, but Doug convinces the airline supervisor that Kunkush can turn 180 degrees around in the carrier. Eventually he is able to deliver Kunkush to the family in Norway for a happy ending.

This true story was written with the help and cooperation of Kunkush’s family. The events of the story represent a real-life situation where people who have different cultural backgrounds come together and help each other during difficult times in their lives. Sue Cornelison’s illustrations are colorful and realistic and successfully capture the suffering and emotions of the characters.

Lost and Found Cat can be paired with Saving Hanno: The Story of a Refugee Dog (Miriam Halahmy, 2019) about a boy and his dog, Hanno, who face peril when he is sent from Germany to England on the Kindertransport trains during World War II. The refugee-animal bond can also be explored with My Beautiful Birds (Suzanne Del Rizzo, 2017).

This story was written by Amy Shrodes and Doug Kuntz, who both volunteered to help refugees in crisis in Greece in different ways. After Doug and Amy met Kunkush, they knew he was somebody’s loved pet and decided to help him reunite him with his family.

Amy volunteers to coordinate the arrival of new refugees and increases the awareness of refugees’ lives and problems among people from her country. She was born in Denver, Colorado but grew up and worked in Oklahoma City. She currently lives in Ypsilanti, Michigan. Amy is working on a new book about a refugee boy and how he reunites with his mother.

Doug is a photojournalist who spent several months in countries receiving refugees (Greece, Turkey, Norway, etc.). His camera lens captures refugees’ crises and brings the images to people around the world.

Illustrator Sue Cornelison lives and works in St Charles, Iowa. She has won over 20 awards such as Washington Children’s Choice Picture Book Award and the National Education Association Reading Circle Catalog. In 2017, she won the Chicago Public Library Best of the Best Books for her illustrations in Lost and Found Cat.

WOW Review, Volume XIII, Issue 3 by Worlds of Words is licensed under a Creative Commons Attribution-NonCommercial-ShareAlike 4.0 International License. Based on work by Miad Bahashwan at https://wowlit.org/on-line-publications/review/volume-xiii-issue-3/6/