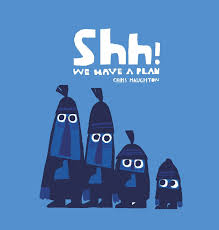 Four friends creep through the woods, and what do they spot? An exquisite bird high in a tree! “Hello birdie,” waves one. “Shh! We have a plan,” hush the others. They stealthily make their advance, nets in the air. Ready one, ready two, ready three, and go! But as one comically foiled plan follows another, it soon becomes clear that their quiet, observant companion, hand outstretched, has a far better idea.

One thought on “Shh! We Have a Plan”