December’s WOW Currents will focus on sharing immigrant and refugee stories of those children and their families who have been forced to leave the comfort of their homelands. Immigrants and refugees leave their known lives due to war, famine and genocide, among other hardships and disasters. The topic of immigration and refugees is of specific relevance in the current political climate throughout the United States. Sharing immigrant and refugee stories is particularly important in our schools, where bullying of students who are deemed to be “different” due to language, religion and skin color has increased.

Illustrations of characters from Playing War by Kathy Beckwith, illustrated by Lea Lyon.

As we approach 2017, it is increasingly vital that communities throughout the country pay attention to the lives of the refugees and immigrants in their towns and cities. To support immigrant and refugee families, we must find ways to support newcomers and make them feel welcome and encouraged to share their experiences and cultures. We need to encourage immigrants and refugees to tell their stories. One way to do this is by showing that as Americans, we value sharing immigrant and refugee stories, seen by books that have already been written and published.

Over the course of December’s posts, WOW Currents will look at the refugee and immigrant stories from across a wide spectrum of countries, such as Syria, Cambodia, Sudan, Iraq, Laos, Somalia, Serbia, Afghanistan, Mexico and Guatemala. While all the stories share sadness, suffering, fear and frustration, they also provide the readers with insight into the bravery, ingenuity, caring and love of immigrants and refugees. These traits have allowed many people to escape from their homelands and begin new lives with immense possibilities. While it feels trite and almost unnecessary to state (I will do it anyway!), it is through the myriad of immigrant groups that have come to the United States that we have become such a strong and freedom-valuing nation. It is time to revisit why immigrants and refugees are so important to the very spirit of who we are as Americans.

We need to provide our children, in every classroom in this country, strategies that help them understand and empathize with peers who are experiencing extreme upheaval physically, socially and psychologically. There are several ways that we can help children relate to the plight of their immigrant/refugee peers. The books we will explore over the next several weeks provide such mechanisms.

Along with both the picture books and chapter books sharing immigrant and refugee stories, we will explore some of the many groups of citizens in the United States that are organizing their communities to be welcoming and supportive to the newcomers. These groups have a great deal to share about how individuals and institutions can be increasingly involved in aiding immigrant/refugee children and their families in adapting to school, finding jobs, immersing themselves in various aspects of their community, and beginning to find their new home a true home. 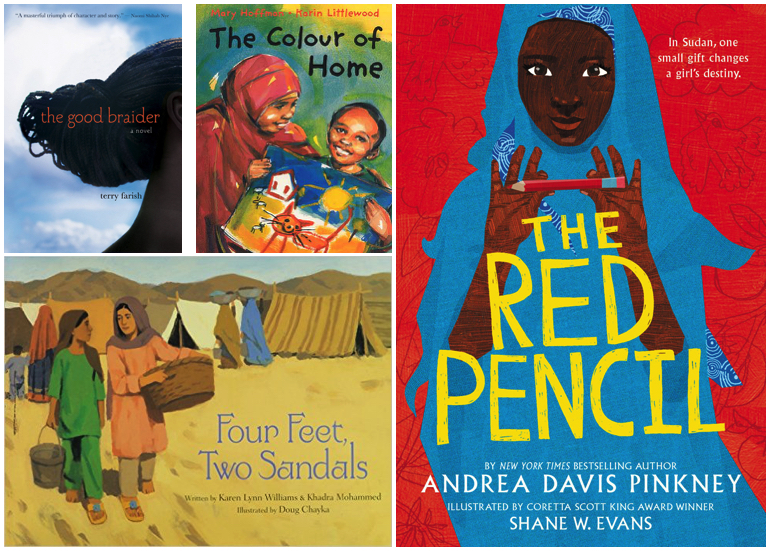 Below is a partial list of the books we will share over the next several weeks. I am sure some of the titles will be familiar.

How Many Days to America by Eve Bunting, illustrated by Beth Peck
Out of Iraq: Refugee’s Stories in Words, Paintings, and Music by Sybella Wilkes
Outcasts United: The Story of a Refugee Soccer Team that Changed a Town (Young Readers Edition) by Warren St. John
Playing War by Kathy Beckwith, illustrated by Lea Lyon
The Red Pencil by Andrea Pinkney, illustrated by Shane Evans
The Color of Home by Mary Hoffman, illustrated by Karin Littlewood
Home of the Brave by Katherine Applegate
Four Feet, Two Sandals by Karen Lynn Williams and Khadra Mohammed, illustrated by Doug Chayka
Coming to America: A Muslim Family’s Story by Bernard Wolf
Mama’s Nightingale: A Story of Immigration and Separation by Edwidge Danticat, illustrated by Leslie Staub
The Good Braider by Terry Farish
Who Belongs Here: An American Story by Margy Burns Knight, illustrated by Anne Sibley O’Brien
Kids Like Me: Voices of the Immigrant Experience by Terri Lapinsky and Judith M. Blohm