Before C.S. Lewis wrote The Chronicles of Narnia, he was a young boy named Jack who spent his days dreaming up stories of other worlds filled with knights, castles and talking animals. His brother, Warnie, spent his days imagining worlds filled with trains, boats and technology. One rainy day, they found a wardrobe in a little room next to the attic, and they wondered, “What if the wardrobe had no end?” Years later, Jack began to think about what could be beyond that wardrobe, and about a girl named Lucy and her siblings. This picturebook biography introduces the beloved creator of The Chronicles of Narnia to a new generation of children who see hidden magic in the world around them.

How does a story begin? Sometimes it begins with a dream, and a dreamer. Mary is one such dreamer, a little girl who learns to read by tracing the letters on the tombstone of her famous feminist mother, Mary Wollstonecraft, and whose only escape from her strict father and overbearing stepmother is through the stories she reads and imagines. Unhappy at home, she seeks independence, and at the age of sixteen runs away with poet Percy Bysshe Shelley, another dreamer. Two years later, they travel to Switzerland where they meet a famous poet, Lord Byron. On a stormy summer evening, with five young people gathered around a fire, Byron suggests a contest to see who can create the best ghost story. Mary has a waking dream about a monster come to life. A year and a half later, Mary Shelley’s terrifying tale, Frankenstein: or, the Modern Prometheus, is published — a novel that goes on to become the most enduring monster story ever and one of the most popular legends of all time.

Told by the bookstore itself, Sylvia’s Bookshop tells the story of the legendary Shakespeare and Company, its owner Sylvia Beach, and the many great writers who gathered there to meet, read, and remind us that books are more than the words on the page. 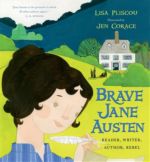 Born in the late 1700s, Jane Austen was a smart, creative girl in a house full of boys, all of whom could aspire to accomplish many things as adults while girls were raised primarily to become good wives. Jane didn’t have much opportunity to go to school but she read everything she could, including all the books in her father’s study. And before long, she began to write her own stories, filled with funny, clever, and inventive characters.

Pairing free verse with over three hundred pages of black-and-white watercolor illustrations, Mary’s Monster is a unique and stunning biography of Mary Shelley, the pregnant teenage runaway who became one of the greatest authors of all time.

Mary’s Monster is a WOW Recommends: Book of the Month for April 2018.

Presents the lives of the talented Bronte family members.

The wordsmith Lewis Carroll is famed for the freewheeling world of Wonderland in his beloved classics Alice’s Adventures in Wonderland and Through the Looking Glass. In this gloriously illustrated picture book, Carroll’s childlike love of life is showcased alongside his brilliance at creating and adapting playful words and phrases. From brillig and uglification to frumious and chortle, the award-winning author Kathleen Krull uses many of Carroll’s own words to tell the story of a man who wanted to make children laugh and whose legacy continues to entertain and delight.

When Jules Verne was born in 1828, his family had his future planned out for him. They expected him to become a lawyer, but he dreamed of writing. He started out writing more traditional poetry and plays, but then he began to create a new, unconventional kind of fiction. It combined adventure, the modern world of science and invention, and his personal view of the future. With fantastical characters, spaceships to the moon, and deep-sea submarines, his books told of things that would not actually occur for decades.

Miguel de Cervantes Saavedra finds refuge from his difficult childhood by imagining the adventures of a brave but clumsy knight.