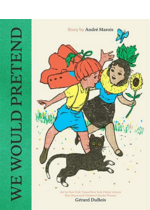 A fantastical story of two friends who venture to the limits of their imaginations. 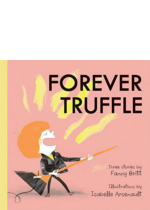 In Truffle the Rockstar, Truffle wants to form a band with his best friends Flo and Riad. They can already picture themselves on stage, wowing the crowd with epic songs. They still have to learn how to play instrument but that’s just a minor detail! Ever since Truffle asked Nina to be his girlfriend, they have been shy around each other. In Truffle Loves Nina, Truffle asks his parents, his friend Riad, his big brother, Louis, and the man who works at the library, for advice on how to let his heart do the talking. In truffle Tackles Existence, Truffle attends his great-grandmother’s funeral, which gets him thinking about the world around him. Are grandparents young once, too? Does Rocket, the dog that his family had to give up, still think about him sometimes? Do people stop loving each other if they don’t see each other anymore? 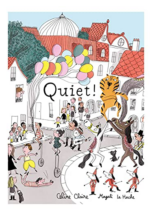 Mr. Martin enjoys tranquility. He likes to drink his coffee in silence, read his newspaper quietly, and take peaceful naps. His neighbors are aware of that, but easily forget — so much so that the noise they make drives Mr. Martin up the wall. One day, he decides to take matters into his own hands… 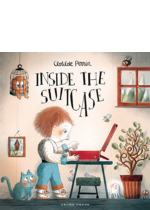 Away behind the hills you’ll find a charming little house. Who’s inside? Knock knock… A boy packing his suitcase. Lift the flaps to see what he takes, and travel with him over oceans and mountains, underwater and into the forest. With every step on this voyage of obstacles the boy faces a decision that will lead to a new adventure and help him get home. Delve deeper into each page and remember to use what’s in the suitcase!

The renowned Napoleon Bonaparte faces an army of a different sort in this witty, unconventional telling of a true event in his life. Everyone knows the Battle of Waterloo was Napoleon Bonaparte’s most crushing defeat, right? Well, some beg to differ. It seems there was another less famous (though perhaps more humiliating) surrender in his past. Let’s call it Bunnyloo. In 1807, Napoleon had ordered his chief of staff to round up rabbits for a celebratory hunt, only, he collected domesticated rabbits, not wild ones. So, when the rabbits were released to begin the hunt, they didn’t run away. Instead, they ran straight at Napoleon and his hunting party. Now, some might think Napoleon — king overthrower, army commander, territory conqueror — would only laugh at an advancing battalion of cute, fluffy bunnies. Think again!

Bear can’t imagine a whole winter without her friend, so when Bird migrates south, Bear decides to follow. She’s never left the forest before, but that won’t stop her from crossing oceans and mountains—and sending letters along the way. But a surprise is waiting for Bear on the beach…

A magnificent narrative inspired by a true survival story that asks universal questions about a young girl’s coming of age story, her identity, her passions, and her first loves.

A young boy takes a new book into the bathroom to read. But what a strange story! One by one, all sorts of animals—a cow, a polar bear, a lion, and more—race across the pages. But where are they running to? Then, the boy’s reading is interrupted by a loud knock on the bathroom door. The very same creatures are outside, lined up to use the toilet!.