This new revised edition of Russia: the Land takes a fresh look at this country’s transformation over the past century. Russia’s economic growth has had an impact on the environment and on the ways of life of its peoples.

Text and photographs portray Brazil’s geography and climate, city and rural life, industry, and transportation, focusing especially on the Amazon and the people and animals that live on the river. 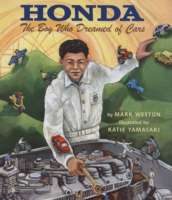 One day in 1914 when Soichiro Honda was seven years old, an astonishing, moving dust cloud appeared in his small Japanese town. The cause was a leaky, noisy automobile–the first the boy had ever seen. At that moment Honda fell in love with cars, and a dream took hold. He would one day make them himself. It took Honda many years to reach his goal. Along the way he became an expert mechanic and manufacturer of car parts. After World War II he developed a motorized bicycle, the forerunner of his innovative motorcycles. Eventually Honda began manufacturing cars, first race cars and then consumer cars. Constantly seeking ways to make his products better than his competitors, Honda grew into a global industry leader. Soichiro Honda had an inventive mind and a passion for new ideas, and he never gave up on his dream. A legendary figure in the world of manufacturing, Honda is a dynamic symbol of lifelong determination, creativity, and the power of a dream.