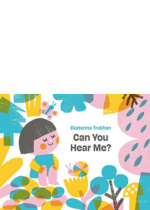 Can you smell the spring wildflowers? How does it feel when you run your hand across rough tree bark? What about the sight of fluffy clouds? Nature surrounds us all — but are we really paying attention?

Seventeen-year-old Tolya Korolenko is half Ukrainian, half Polish, and he joined the Soviet Red Army to keep himself alive and fed. When he not-quite-accidentally shoots his unit’s political officer in the street, he’s rescued by a squad of Ukrainian freedom fighters. They might have saved him, but Tolya doesn’t trust them. He especially doesn’t trust Solovey, the squad’s war-scarred young leader, who has plenty of secrets of his own.

Deep in the woods is a little wooden house, with nine neat windows and a red front door. When a little mouse decides it will make the perfect home, so do the other animals in the wood – including a great big bear! But will the bear be able to put everything right when their home comes tumbling down? Find out in this beautifully illustrated retelling of a classic Russian folk tale.

After her family is exiled from the capital of Tsaretsvo, Olga must use her wits, cunning, and forbidden magic to rescue her kidnapped sister, Mira, and return home from the Republic of Birds. Inspired by Russian folklore.

Alexander Utkin’s Gamayun Tales are fresh and modern adaptations of familiar Russian folktales, teamed with bold and beautiful illustrations. Jam-packed with stories of magical quests and talking animals, golden chests that turn into palaces and encounters with terrifying Water Spirits, there’s no end to the adventure in these books!.

The Adventure Continues In This Exciting Sequel To Anya And The Dragon, Where A Dangerous Monster Lurks Beneath The City And Only Anya Can Keep Him From Taking Her Friends’ Magic — And Their Lives. Perfect For Fans Of The Girl Who Drank The Moon.

Found abandoned in a bear cave as a baby, Yanka has always wondered about where she is from. She tries to ignore the strange whispers and looks from the villagers, wishing she was as strong on the inside as she is on the outside. But, when she has to flee her house, looking for answers about who she really is, a journey far beyond one that she ever imagined begins: from icy rivers to smouldering mountains meeting an ever-growing herd of extraordinary friends along the way.

Laika was the abandoned puppy destined to become Earth’s first space traveler. This is her journey. Nick Abadzis masterfully blends fiction and fact in the intertwined stories of three compelling lives. Along with Laika there is Korolev, once a political prisoner and now a driven engineer at the top of the Soviet space program, and Yelena, the lab technician responsible for Laika’s health and life. This intense triangle is rendered with the pitch-perfect emotionality of classics like Because of Winn Dixie, Shiloh, and Old Yeller. Abadzis gives life to a pivotal moment in modern history, casting light on the hidden moments of deep humanity behind history. Laika’s story will speak straight to your heart.