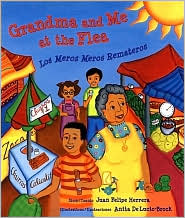 Early Sunday morning Juanito and his grandmother prepare for a day at the flea market. As Grandma, a rematero or flea market vendor, sells used clothing in her booth, Juanito meets old friends and helps his grandmother and the other remateros. At the zarape booth the rematero gives Juanito a peacock blanket for his grandmother, who helped out when a sister injured her back. Then Juanito rushes a letter to Señor Raya at the hardware booth. The letter, written in English by Grandma, will let Señor Raya get a month of free rent while the landlord fixes his damaged apartment. Grandma also trades healing herbs for chiles with another rematero. The jewelry-man gives Juanito a copper bracelet to ease Grandma’s rheumatism in remembrance of her help when he first came to the United States. Juanito and his friends learn that being a true rematero is about helping others.

Both the author and illustrator are Mexican-American. An introduction by the author explains how this story is based on memories of visits to the local remates or flea markets of his childhood. Bright, colorful illustrations reflect Mexican folk art and add a cheerful, busy feel to the book appropriate to the setting. The story calls to mind the active, fast-paced sights and sounds of a flea market as Juanito and his friends explore the different booths. However, the story ends somewhat abruptly.

Traditions and everyday objects familiar to many Mexicans and Mexican-Americans are woven throughout the book, including foods such as churros, nopalitos, chiles and tamales, language brokers who help Spanish-speakers navigate an English-speaking world, the use of healing herbs for health problems, and watching telenovelas. Close familial ties are portrayed as the grandmother takes care of Juanito while his parents migrate north to work in the apple orchards. This book also deals with socioeconomic issues that will be familiar to many readers. Old becomes new again as used clothes and toys are sold at the flea market to people who need the inexpensive items. Finally, by showing how the remateros trade goods and services, the book highlights the informal social and economic networks that have historically helped sustain and support immigrants, migrants, and people living on the margins of mainstream society.

Although this is a bilingual book, the English text includes Spanish words that are always easy to figure out through the surrounding text. An editor’s note explains why the English and Spanish titles for the book have somewhat different meanings. Because the exact meaning and connotation for los meros meros is impossible to translate, the author chose an English title that is just as relevant to the story but is not a direct translation. This discrepancy could lead to an interesting discussion about the nature of language and how some words and concepts in one language can not be translated into another language.

Students and teachers in the Rio Grande Valley in Texas who have read this book had many positive reactions to the story. They appreciated the relationships depicted, especially the loving bond between the grandmother and Juanito, and recognized how common it is for relatives to care for a child while the parents are away working. They also enjoyed the depiction of the remate or flea market (although it is more commonly known as a pulga in the Rio Grande Valley), being familiar with them through experiences in their own childhoods or from weekend bargain shopping.

This book could be paired with Playing Lotería/El juego de la Lotería by René Colato Laínez (2005), which also deals with a Latino grandmother/grandchild relationship. Another appropriate book is Speak English for Us, Marisol! by Karen English (2000). This book depicts the social and economic networks of Marisol and her family as Marisol acts as a language broker for the neighborhood.