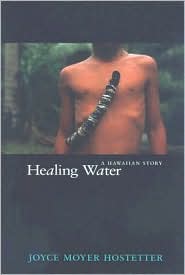 This historical fiction novel describes the life of thirteen-year-old Pia, who is diagnosed with leprosy (now known as Hansen’s disease) and sent to Kalawao on the island of Moloka`i to live out the rest of his life. Pia’s experiences depict the pain and suffering endured by the Hawaiians with the dreaded disease who were exiled to Molokai`i’s Kalaupapa peninsula in the mid-1800s. The novel particularly focuses on Father Damien’s life and work there in the late 1800s.

Pia’s story is driven by his relationship with a family friend, Kamaka, a father figure to Pia, who teaches him survival skills as a child. When Kamaka learns that Pia is afflicted with leprosy, he withdraws from Pia’s life completely. At first Pia is confused and saddened by Kamaka’s rejection, but his sorrow soon turns to anger. When Pia arrives on Moloka`i, his life is overcome by his anger and he becomes unruly and unlawful in his struggle to survive. Despite the thievery, starvation, and lawlessness present in Kalawao, others try to convince Pia to find solace with each other and a belief in God. Pia’s life takes a turn when Kamaka moves to Kalawao with his wife. Kamaka must fight his own fear of leprosy and make amends with Pia. In the final chapters, Father Damien teaches Pia to forgive and brings comfort, hope, and order to the people on Kalawao.

Another historical fiction novel that adolescent readers might also enjoy reading is In the Shadow of the Pali: A Story of the Hawaiian Leper Colony by Lisa Cindrich (2002). Both books are written on the same topic during the same time period and told through the eyes of a teenage character and may provide an interesting discussion for readers to compare differences between how the authors approach this difficult topic.

Some native Hawaiian readers have praised Hostetter for the research she conducted about Moloka`i, Hawaiian culture, and the history of Father Damien’s life in Hawai`i. Her research is detailed in an author’s note at the end of the book; however, it is not clear how much time the author spent in Hawai’i. She does mention visiting Kalaupapa National Historic Park and acknowledges a number of individuals who assisted her in ensuring historical and cultural accuracy. Another native Hawaiian reader questioned the cultural and historical authenticity of the story with respect to the lifestyle of the main character. This reader’s concern was the Hawaiian chapter headings, which may be translated accurately into English, but do not reflect implicit cultural meanings. She suggested these cultural nuances are often difficult to capture in a literal translation. This reader also commented upon the tendency of non-resident writers to highlight the moral depravity of Moloka`i – the stealing, the sexual predators, the lawlessness, and inept managers in Kalawao – more so than books written by residents. Overall, readers find Healing Water to be a wonderful story of rejection and survival and the ultimate power of love and forgiveness. In addition, the chapters about Father Damien and his contributions to society make this a valuable story to share with young adult readers around the world.