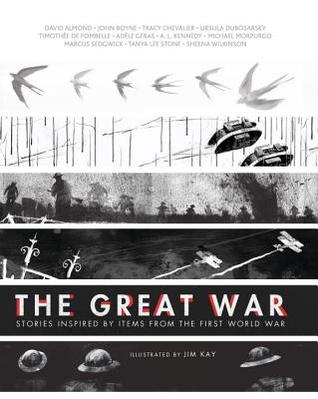 What do a helmet, sheet music, compass, a butter dish, and a writing kit have in common? In The Great War, these ordinary objects each propel powerful, personal stories set in the World War I era–stories that speak in many ways to various readers of the impact of war on individuals and society.

Inspired by actual items from the World War I era, this collection of short stories reflects a variety of genres, perspectives, and contexts. Eleven noted authors were asked to select an item from authentic WWI artifacts and create a story around the item. Despite being fictional in terms of characters and their connections to WWI, each story reflects the author’s knowledge of historical events and insights of this particular era. With diverse creative approaches to story, these authors reveal war’s impact, not only on those present during its ongoing, but also in following years as some stories are told from a time well past WWI and supported by memories of those characters and the impacts over the years and generations beyond.

As the world marks the centennial years of WWI, this book brings to light the impact of war on individuals, communities, and nations with a focus on communities within Great Britain. Themes that weave across these 11 stories include defining self through one’s country, looking across time for understandings, personal loss, peace through understanding conflict, and building relationships through shared burdens. Young readers at the middle school level and beyond are the audience for this book for which contemporary authors position objects within significant social contexts giving voice to those who no longer live to speak of their experiences during this troubled time—voices that can give potential heed to individuals and nations today. For example, Michael Morpurgo tells of a tin helmet that was handed down by past generations in a family. Once taken for granted, its importance is unveiled through a school assignment for a young British lad. Marcus Sedgewick takes the perspective of an “angel,” actually the ghost of a soldier, who is brought to consciousness by an observant young boy who finds a piece of metal, a remnant of a Zeppelin, embedded in a tree. The ghost weaves in and out of the minds of people past and present as the story tells of why the piece of metal is in the tree. David Almond focuses on the power of story that can be shared from generation to generation as a woman who lost her fiancée in WWI brings his writing tools to a class to instill the power of writing in students by sharing her story. As the narrative continues with one young lad sharing the same story as he becomes an adult, Almond concludes with, “Go on. Create a better world. Write a world that has no war in it” (p. 145).

Significant to these stories is the art of Jim Kay. Both informative and provocative in black and white images with recurring shapes reflecting shrapnel, the illustrations provide authentic insights to the situations and contexts within WWI. Between the stories, images and brief informational blurbs help to situate the stories by revealing soldiers in a trench, women in a munitions factory, the Zeppelin bomb, the Lusitania, fighter planes, the role of horses, and the destruction of war among other topics. Kay, who also created the images for A Monster Calls (Patrick Ness, 2012), uses an abstract approach with realistic topics to connect stories and readers to WWI. The book’s cover repeats these images in horizontal strips across both the front and back while the actual book’s bound cover reveals the bold numbers 1914 on the front and 1918 on the back, both in a distressed white on black background. End pages are red with continuous shrapnel shapes in black.

The book’s organization is such that a story stands alone; however, combined they appeal comprehensively to both the universal and individual aspects of war. Following the 11 stories, brief images and explanations of the objects at the center of each story are provided. Additionally, a picture and brief biography of each author and the illustrator is provided that reveals their awards, previous works, and diverse nationalities.

Teaching of past eras, especially social issues such as war, is problematic when trying to engage readers in ways that ask them to relate the humanity of an era or event to that of today. Stories such as these help readers make those connections in whatever way they best can relate and create a basis for understanding the larger issues. Other books that can support this understanding are: World War I, The Definitive Visual History (R. G. Grant, 2014); The War to End All Wars (Russell Freedman, 2013); and War Horse (Michael Morpurgo, 2010).