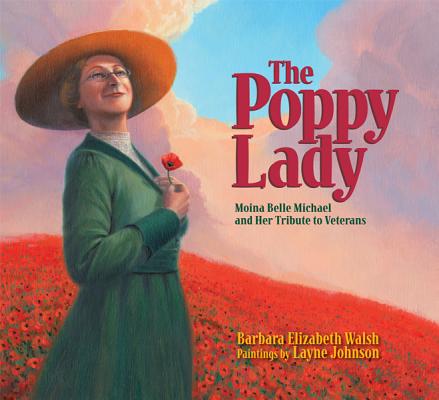 This nonfiction book tells the story of the woman who promoted the poppy as a tribute to veterans. In 1914, while on a vacation tour across Europe, Moina Belle Michael witnessed the outbreak of World War I. Her vacation trip provided her with an unintended, firsthand exposure to the horrors of war. Upon her return home, Moina taught at the University of Georgia. In 1917, when President Wilson asked Congress to enter the war, Moina worried about the young men who would fight the war. Once the U.S. declared war, Moina decided she had to do something to help. Initially she knitted socks and sweaters and rolled bandages. Always wanting to do more, she went to military camps and delivered books, magazines, and candy to soldiers, waiting to be transported to the battlefields in Europe. When the time came for the soldiers to leave, Moina stood on the train station platform to see them off.

Still wanting to do even more for the war effort, Moina went to New York City to become a canteen worker for the YMCA. She completed the training, but at 49 years old, she was too old to work overseas. Instead, she set up a recreation room in the basement of a Columbia University building. She brightened the room with flowers and the young men and women who would soon cross the “submarine-infested Atlantic” to face “the gas, bombs, and shrapnel of the battle front,” came to the room to rest and socialize. During this time, Moina read the poem, “We Shall Not Sleep,” written by a young Canadian doctor, Lieutenant Colonel John McCrae. The poem so moved her, that Moina wrote her own five-line verse in which she made a promise to the soldiers who would not be coming home. From that poem and because many of her students were among the missing, Moina wanted a symbol to remind people of their sacrifice and courage. Moina, who had already done so much to support the troops overseas and at home, decided to use the poppy as a symbol of tribute to veterans and their fallen comrades.

Author Barbara Elizabeth Walsh and artist Layne Johnson worked with experts, primary sources, and Moina’s great-nieces to research and understand Moina Bell Michael. Walsh also used original interviews and Moina’s own book, The Miracle Flower (1941) to inform the story. Walsh’s first and only book was inspired by her father’s interaction with Moina during the 1940s. As a young soldier during World War II, Walsh’s father met Moina and was touched by her kindness. Her father’s stories about Moina encouraged Walsh to find out more about the “Poppy Lady” who soldiers respected and remembered fondly.

Johnson’s oil paintings offer several dramatically lit, almost saintly portraits of Moina Belle Michael as well as a somber scene of a battlefield, covered with red poppies and white crosses. Rich with color, Johnson’s narrative paintings portray Moina Belle Michael’s life and times with warmth, drama, and attention to detail. The illustrations depict soldiers going off to war, women working on the home front, and period dress. Johnson has collaborated on more than a dozen children’s books over the past 20 years and once stated in an interview, “It’s challenging to show not just what the words say but what they don’t.” He has received awards for his illustrations in Farmer George Plants a Nation (2013), Off Like the Wind! The First Ride of the Pony Express (2010), Brian’s Bird (2000), and The Poppy Lady. Johnson is a member of the Society of Children’s Book Writers and Illustrators and the Picture Book Artists Association.

This well-written informational picture book will be enjoyed by readers and especially lends itself to a read aloud. Teachers will find it an excellent addition to units on World War 1, service to others, and/or altruism. Matt de la Pena’s (2016) Last Stop on Market Street creates an interesting pairing with The Poppy Lady in regard to the theme of altruism or service. Moina Bell Michael provided service to soldiers during both World Wars and had a large national impact. By comparison, the grandmother and grandson in Last Stop on Market Street provide service at the local community level when, after attending church one Sunday, they volunteer at a local soup kitchen. These two stories work well together to demonstrate service on two separate levels.

In Flanders Fields: The Story of the Poem by John McRae written by Linda Granfield and illustrated by Janet Wilson (2014) offers additional background to support The Poppy Lady. The selection of the poppy as a symbol of remembrances by Moina Bell Michael is based on the poem by Colonel John McCrae. Granfield tells the story of McCrae’s poem and explains the symbolic meaning of the poppy.

Karen Kenney’s (2014) National Geographic Kids Everything World War I: Dig in with Thrilling Photos and Fascinating Facts is a visually engaging book filled with photos, statistics, and facts from World War I. This book provides curious students of World War I with all types of information and complements other World War I stories or stands alone as a resource book.