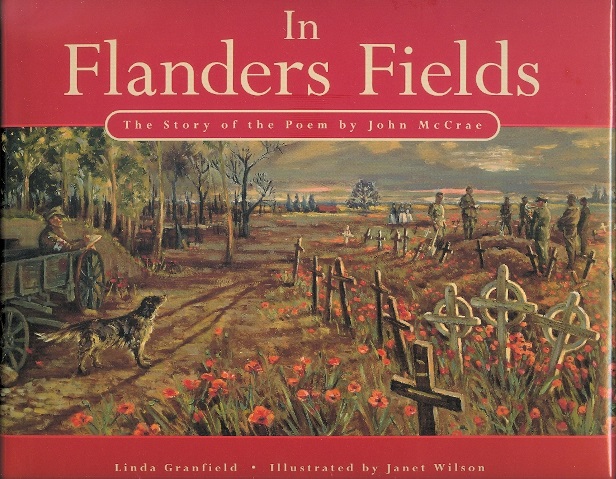 The stanzas of the famous WWI poem are interspersed with a biographical sketch of John McCrae and descriptions, photos, and drawings of the front lines, particularly life in the trenches. The result is a nonfiction text that gives the historical and cultural context for how the poem came into existence and became so well-known. It also explains how the poem inspired the use of red poppies as symbols of remembrance. Red poppies grew and bloomed quickly, covering the fields where fallen soldiers were temporarily buried before being moved to permanent military cemeteries.

John McCrae, an established Canadian physician and poet, felt compelled to serve in WWI based on his family history, his personal history of fighting in the Boer War, and his feelings of duty to serve. Canada was still part of the British dominion during WWI, so Britain’s declaration of war automatically included Canada and other Commonwealth countries. There was tremendous pressure on young men to enlist and serve. While there was no draft or conscription in Canada until 1918, those who did not volunteer faced public humiliation as women handed non-uniformed men a white feather or threw white flour on them as a rebuke for cowardice (www.firstworldwar.com/atoz/whitefeathers.htm). Colleen Heffernan’s novel, A Kind of Courage (2005), gives a layered look at that “obligation” to fight in the war as she tells the story of a young conscientious objector sent to work on a farm in Alberta who faces harassment from boys too young to serve and adults with sons in the war.

In Flanders Fields explains the events in the Spring of 1915 that gave John McCrae the inspiration to write his poem and relates why the three stanzas are so significant. While he was still alive, his poem was used as a recruitment tool and, since his death, red cloth poppies have been worn in remembrance of veterans. Through my own personal experience of living in France, the U.S., and Canada, Canada puts a much greater importance on Remembrance Day. Families diligently attend Remembrance Day services and sport red poppies for weeks before and after November 11th. In spite of shifting views over the last 100 years regarding armed conflict, McCrae’s “torch” and the call to follow in his footsteps have kept alive the need to never forget those who fell in the Great War.

Linda Granfield is a Canadian author of many nonfiction books about history, especially 20th century wars. Following the success of In Flanders Fields, the author wrote several companion books: Where Poppies Grow: A World War I Companion (2005) and Remembering John McCrae: Soldier-Doctor-Poet (2011). In addition, picturebooks depicting life in the trenches, particularly the documented British-German Christmas gatherings along the front line early in the war, include: And the Soldiers Sang (J. Patrick Leis & Gary Kelley, 2011), Christmas in the Trenches (John McCutcheon & Henri Sørensen, 2006), and Shooting at the Stars: The Christmas Truce of 1914 (John Hendrix, 2014).

Janet Wilson is a Canadian illustrator, known for her thought-provoking oil paintings and illustrations that have garnered major awards. Her recent publications include her series of books about the power of “one” to motivate and encourage readers to make a positive difference: One Peace: True Stories of Young Activists (2008), Our Earth: How Kids are Saving the Planet (2010), Our Rights: How Kids are Changing the World (2013), and Our Heroes: How Kids are Making a Difference (2014).

In Flanders Fields: The Story of the Poem by John McCrae was a White Ravens 1997 selection by the Internationale Jugendbibliothek/International Children’s Library in Munich.