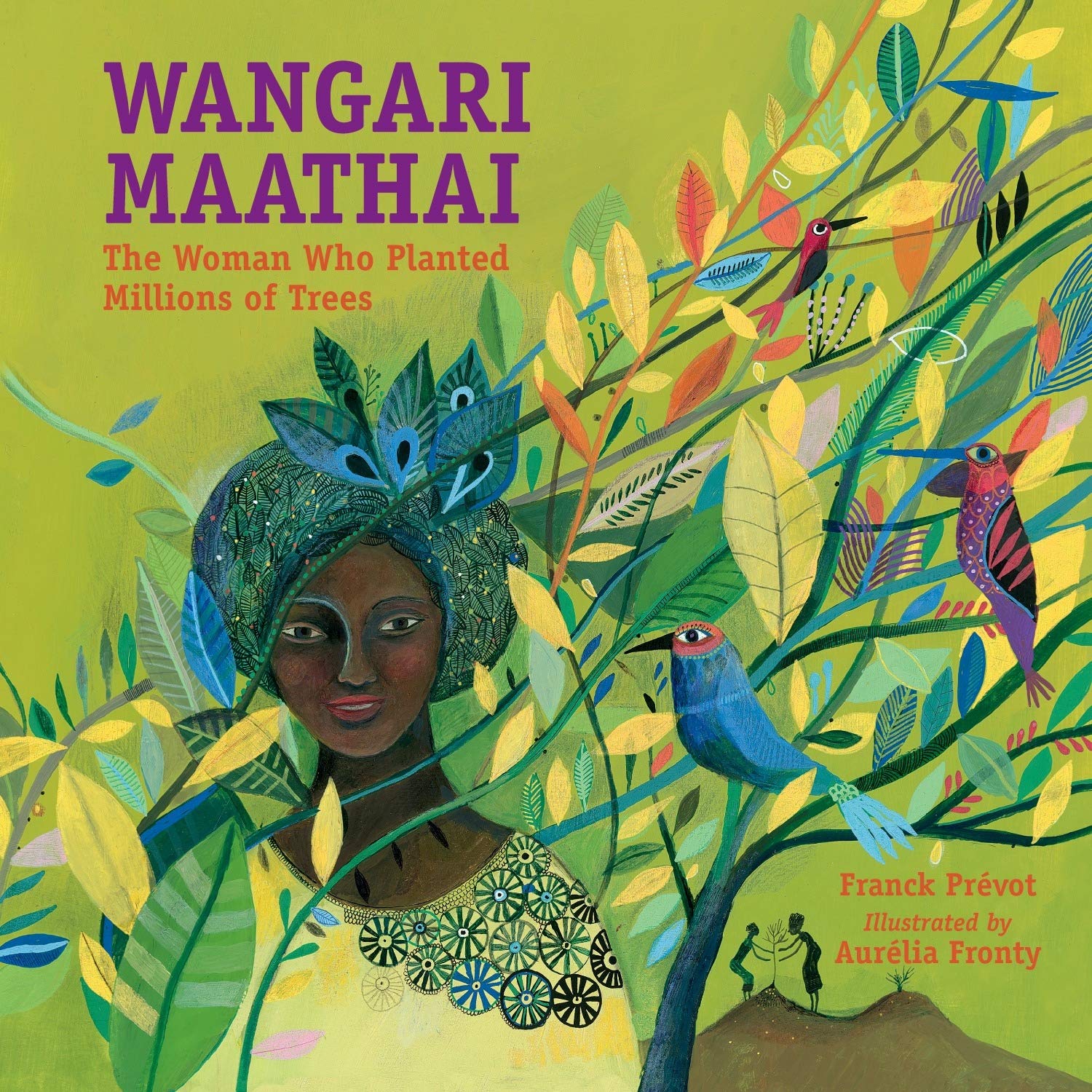 This picture book biography focuses on Nobel Peace Prize winner Wangari Maathia, a political activist who was born and raised in Ihithe, a small village in Kenya, in the 1940s. Wangari came from a humble background and cared enough about trees to champion an environmental cause and take on the President of Kenya at the time. The book recounts her life, providing insight into the cultural customs, the country’s political state, and the devastation resulting from the deforestation of Kenya by British plantation owners. Wangari was fortunate that in an era when girls in Kenya were expected to help their mothers at home rather than attend school, her parents enrolled her in school. Wangari became one of very few African females who was literate at that time. In the 1960’s she was one of six hundred students from Kenya invited to the United States to pursue their studies. She returned to Kenya after the country gained its independence from Britain. To resolve the deforestation of Kenya, Wangari initiated the Green Belt Movement to plant trees to replace the ones cut down by the British and Kenya’s own government. Wangari enlisted the help of women from all over Kenya to plant trees. Her peaceful fight for an environmental cause and democracy in her country resulted in Wangari’s imprisonment, which did not dissuade her from continuing her movement. She was eventually elected to parliament. On October 8, 2004, she was awarded the Nobel Peace Prize for her efforts and work in Kenya. At the end of the book, Prévot offers a historical timeline with actual photographs of Wangari and important events in Kenya. In addition, Fronty fills the book with large colorful illustrations that complement the story.

This book raises awareness of the value of trees. Wangari pointed out that cutting down trees destroys forest and leads to erosion, which affects the wildlife. Trees bear fruit that feed people, provide shade, and purify the air we breathe. This story reminds us that environmental issues affect all countries and people. This book discusses diverse topics, provides insight about the hardships that other countries have experienced, and highlights the achievements of a woman who dared to challenge the status quo in her country. It is a story that offers a deep insight into caring for trees, the environment, and giving voice to women. It discusses political change and features a female role model.

Wangari Maathai: The Woman Who Planted Millions of Trees can be paired with other books on her such as Planting the Trees of Kenya: The Story of Wangari Maathai (Claire A. Nivola, 2008), Mama Miti: Wangari Maathai and the Trees of Kenya (Donna Jo Napoli & Kadir Nelson, 2010), Seeds of Change (Jen Johnson, 2010), and Wangari’s Trees of Peace: A True Story from Africa (Jeanette Winter, 2008). It can also be paired with other books focused on political activists who made a difference in other countries, such as Dreams of Freedom: In Words and Pictures (Amnesty International, 1841) and Go Show the World: A Celebration of Indigenous Heroes (Wab Kinew & Joe Morse, 2018). It can also be paired with stories of young people taking action, such as Amina: Through My Eyes (J. L. Powers & Lyn White, 2015). Students can discuss the contributions these individuals have made and their significance. This text set can also introduce social injustices carried out by governments, provide connections to female role models who have left a legacy, or convey the adversities and hardships individuals in other countries have endured.

Franck Prévot was born in 1968 in Bourg-en-Bresse, France. He is a French author and illustrator who began writing stories at the early age of seven. In 2003 he became a teacher and published his first book. Since then, he has published more than 20 books in France, some of which have been translated in other languages. More information about this author can be found at The Children’s Bookshow.

Aurélia Fronty is a French illustrator who has produced artwork for more than forty books. She discovered her passion for art early on in her life. Her trips across Africa and Asia have influenced her vibrant illustrations. More information about this illustrator can be found at The Children’s Bookshow