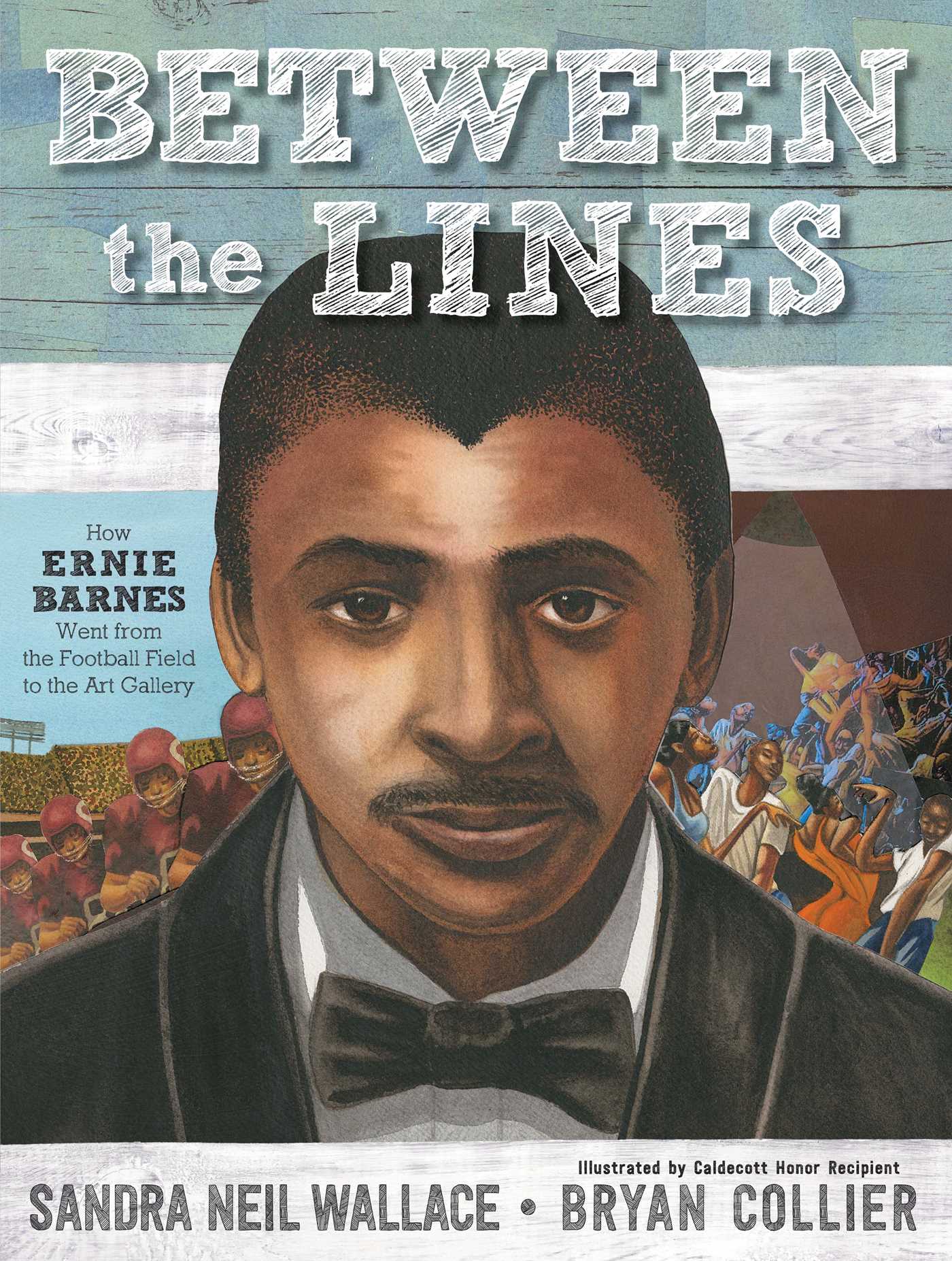 Between the Lines: How Ernie Barnes Went from the Football Field to the Art Gallery
Written by Sandra Neil Wallace
Illustrated by Bryan Collier
Simon & Schuster, 2018, 48pp
ISBN: 9781481443876

Ernie Barnes wants to draw. He draws everywhere he can when growing up in the segregated South. Although he isn’t welcomed in libraries and museums, his mother knows he loves to paint. She takes Ernie with her as she works as a housekeeper for a wealthy man and Ernie sees paintings that come alive for him. Ernie draws what he sees in his sketchbooks and continues to draw even after getting scholarships to play football. During his college years, he plays football while also studying art. As the push for equality comes during the civil rights movement, Blacks are finally allowed to go to museums, but Ernie still does not see paintings by Negro artists. Ernie continues to play professional football while dreaming about painting. After watching his new team play, he creates his first football painting called The Bench. Ernie goes on to face many challenges in his journey as an excellent athlete while continuing to desire to be an artist. When Ernie decides to end his career as a football player, he struggles at first to live as an artist, but he never gives up. Ernie finds ways to share his paintings in a meeting of the American Football League (AFL) and soon becomes their official artist. He is hired to paint with a football salary. Ernie’s artwork is successfully exhibited in New York galleries and he soon becomes a household name. He excels at creating movement in his paintings and proves to the world that he can thrive as an excellent athlete and a successful artist.

Bryan Collier’s watercolor and collage illustrations include the actual art of Ernie Barnes to honor his unique style and originality. In the Illustrator’s Note, Collier talks about meeting Ernie Barnes and how his work inspired him and many other artists.

Ernie Barnes’s story in Between the Lines exemplifies the dreams in all of us. Barnes wanted to be an artist and a football player and by being true to himself, accomplished his dreams, while also pioneering a new style of art. It was important for him to show the beauty and grace of his world in his art and this helped inspire others along the way. This is an excellent book for children to learn about persistence and the will to follow one’s dream.

This biography can be paired with The Undefeated which Kwame Alexander and Kadir Nelson (2019) created as a love letter to America. It recognizes the struggles and triumphs of Black America and of everyday people who remained steadfast and brave as they journeyed towards their dreams. Another book that pairs well is Aunt Luce’s Talking Paintings by Francie Latour and Ken Daley (2018). This book tells of a young girl and her Aunt Luce, who loves to paint about Haiti and its history. Through her aunt’s paintings, the girl comes to know and understand Haiti as her home with a rich history that helps her see who she is as a person.

Sandra Neil Wallace is a trailblazing author and sportscaster. As the first female ESPN reporter to host an NHL broadcast, she is an agent of change. She is proud to share her stories as a daughter of a refugee and a concentration camp survivor. Her books show how people broke barriers. Between the Lines: How Ernie Barnes went from the Football Field to the Art Gallery won the 2019 NCTE Orbis Pictus Award for Outstanding Nonfiction. Sandra Neil Wallace’s narrative writing style continues to inspire children to dream and be agents of change. She lives in New Hampshire with her family. Her books co-authored with Richard Wallace include First Generation: 36 Trailblazing Immigrants and Refugees who Make America Great (2018), Bound by Ice: A True North Pole Survival Story (2017), and Blood Brother: Jonathan Daniels and His Sacrifice for Civil Rights (2016).

Bryan Collier is an award-winning illustrator. He is a four-time Caldecott Honor recipient. His illustration style combines watercolors and collage to create unique artwork pieces. Bryan was inspired by Ernie’s art as he was introduced to this creative giant’s work early on in his life. He chose to showcase Ernie’s original work in the book instead of re-creating them because Ernie’s artistic style truly speaks for itself.