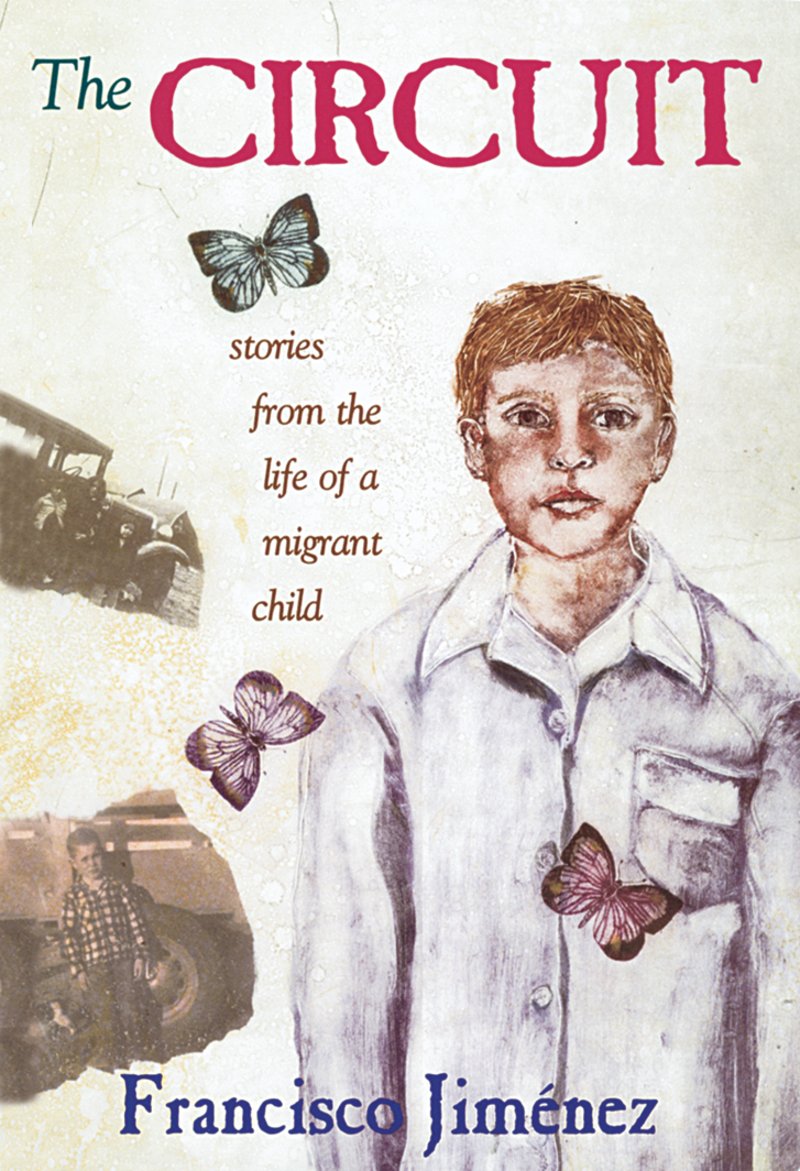 The Circuit is a moving autobiographical book composed of short stories about Francisco Jiménez’s childhood as an undocumented immigrant, son of migrant farmworkers, and a migrant worker himself. Francisco comes to the United States with his parents at age four along with his older brother Roberto. His father dreams of moving to California where he is sure the family’s fate will change and they will have a better life. Roberto and Francisco are excited and impatient to arrive in California, a place where they hear people sweep money off the streets. Unfortunately, their envisioned paradise is really a never-ending cycle of arduous work, constant moving to follow the harvest, and poor living conditions.

Each chapter is a short story that stands alone and reads like a detailed flashback or memory told by Francisco as a child. The chapters are brilliantly written with the essence of innocence and the realness of childhood dreams and fresh emotion. Through Jiménez’s childhood accounts, we learn about the struggles of migrant farm working and the fear of deportation that haunts many children. Readers also experience the struggles of learning a new language and adapting to a new school setting while negotiating family relationships, friendships, cultural identity and growing up amidst the backdrop of poverty. This is a beautifully told story of an underrepresented and quiet group of people in the United States.

Francisco is a brilliant and caring child who is always hungry to learn more and is willing to help his family in whatever way possible. In the chapter, Inside Out, Jiménez details his first experience entering U.S. schools. He is excited to begin school until his brother tells him about his experience of being hit with a ruler for not following directions in English, a language he did not speak. Nevertheless, he is still excited to attend school. His first day is overwhelming because he does not understand anything the teacher is saying. In the midst of the confusion, Francisco finds refuge in drawing and watching a caterpillar in a jar that is slowing transitioning into a butterfly. Through time and even a playground scuffle, Francisco finally begins to figure out the rhythm of school. Just like the butterfly, Francisco transitions from the inside out.

Francisco Jiménez’s autobiographical book is an inspirational series of stories of a person who dealt with many challenges. It proves that one’s struggles and adversities do not define how far someone can go. These stories are particularly relevant for young Latinx students who can make cultural connections and relate to Francisco’s early experience beginning school and not speaking English. As a Latina who learned English as a second language, I can relate to Jiménez’s experience of feeling out of place and embarrassed in an unfamiliar place.

The Circuit: Stories from the Life of a Migrant Child was published in 1997, and originally written in English, then translated to Spanish. It is the first of a four-book series, all available in English and Spanish. The last chapter ends with a heart wrenching cliffhanger, imploring the reader to continue the series to find out more. The Circuit can be paired with the other books in the series: Breaking Through (2002), Reaching Out (2009), and Taking Hold (2017). These books provide information on Jimenez’s journey through college and young adulthood as a son of migrant workers.

Francisco Jiménez is a Professor Emeritus in the Department of Modern Languages and Literatures at Santa Clara University (SCU) in Santa Clara, California. He received his BA from SCU and an MA and Ph.D. in Latin American studies from Columbia University. He was also the recipient of the Carnegie Professor of the Year Award in the year 2002.