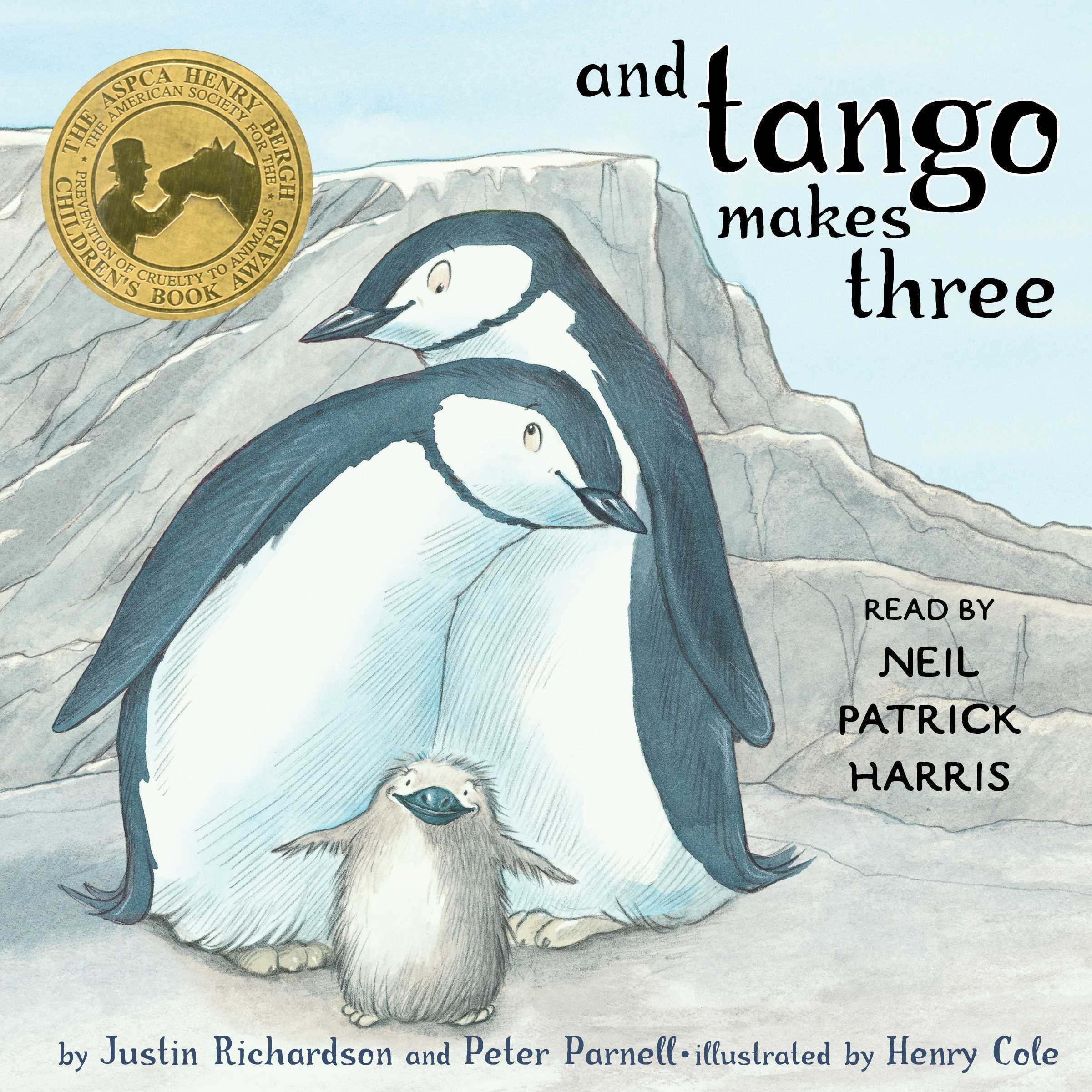 In Central Park there is a zoo that many families love to visit. The animals in the zoo have their own families too, none more loved than the penguins. Two male penguins named Roy and Silo spend their time together and their keeper, Mr. Gramzay watches as Roy and Silo make a nest together just like other couples. The other penguins take care of the eggs in their nests, but Roy and Silo’s nest remains empty. One day, Silo finds a rock that looks like an egg and brings it back to the nest, but no matter how much or how carefully he sits on it, it doesn’t hatch. Mr. Gramzay decides to help. He finds an egg that needs parents and Silo sits and sits until finally out comes a baby penguin! Roy and Silo have a baby named Tango that they care for and love. They are a happy family. And Tango Makes Three is a lighthearted and happy story surrounded by Cole’s beautiful illustrations, showing readers that Roy, Silo, and Tango are as happy and loved in their family as other penguins.

And Tango Makes Three is a story that introduces the topic of same-sex parents and adoption in a positive and simple way. The story first describes the many families that live in New York and visit the zoo, as well as the different animals that live as couples in the zoo. The authors quickly introduce readers to the theme of family by focusing on this common aspect of life for animals and people. Penguins are known to be primarily monogamous, meaning they mate for life, which makes this story even more interesting. While the other male penguins are wooing females, Roy and Silo woo each other. They walk, swim, eat, cuddle, and build a nest together, just like the rest of the penguins and without being rejected by the group.

The story continues by bringing in adoption. The zookeeper finds an egg that needs to be cared for or else it could die. By giving the egg to Roy and Silo the baby penguin gets two loving parents and the couple is given a baby to raise and love. There was no need to interfere in the care of the egg once given to the penguin couple, as they clearly demonstrated the skills needed to care for a baby. Even the inherited desire for a baby is apparent, as they found a rock to nurture because it looked similar to an egg. The other penguins didn’t react negatively or shun Roy, Silo, or Tango and human visitors at the zoo loved the family. They were as they were meant to be and lived true to their nature.

And Tango Makes Three is an important story for children in same-sex families as well as children who need to be exposed to a range of diverse families. This book is a positive way to introduce the concept of same-sex couples. Students may have trouble understanding technical terms, but they understand love. Many teachers support families and children who are LGBTQ+ but are reluctant to discuss the topic for reasons that stem from personal modesty or fear of backlash. Exposing students to aspects of everyday life, no matter how controversial, broadens and develops their minds and understanding. Books dealing with challenged content encourage discussions of injustices as well as highlight differences in life and society.

Justin Richardson is an assistant professor of psychiatry at Columbia and Cornell and the coauthor of Everything You Never Wanted Your Kids to Know About Sex (But Were Afraid They’d Ask) (Justin Richardson & Mark Schuster, 2014). Dr. Richardson has been featured in The New York Times and The Washington Post, on the Today show and NPR’s Morning Edition, and in numerous magazines. He talks with parents and teachers about parenting and children’s sexual development.

Peter Parnell is a playwright whose plays have been produced at the Public Theater and Playwrights Horizons in New York City and the Mark Taper Forum in Los Angeles, among others. He is a producer and has written extensively for television. He lives in New York City.

Henry Cole has written and illustrated more than fifty books for children, including Spot, the Cat (2016), Unspoken (2012), and Three Hens and a Peacock (Lester Laminack & Henry Cole, 2014). A former elementary school teacher, he now writes and paints full time from Ft. Lauderdale, Florida.