Abdi Nor Iftin first fell in love with America from afar. As a child, he learned English by listening to American pop artists like Michael Jackson and watching films starring action heroes like Arnold Schwarzenegger. When U.S. marines landed in Mogadishu to take on the warlords, Abdi cheered the arrival of these real Americans, who seemed as heroic as those of the movies. Sporting American clothes and dance moves, he became known around Mogadishu as Abdi American, but when the radical Islamist group al-Shabaab rose to power in 2006, it suddenly became dangerous to celebrate Western culture. Desperate to make a living, Abdi used his language skills to post secret dispatches to NPR and the Internet, which found an audience of worldwide listeners. But as life in Somalia grew more dangerous, Abdi was left with no choice but to flee to Kenya as a refugee. In an amazing stroke of luck, Abdi won entrance to the U.S. in the annual visa lottery, though his route to America was filled with twists and turns and a harrowing sequence of events that nearly stranded him in Nairobi. Now a proud resident of Maine and on the path to citizenship, Abdi Nor Iftin’s dramatic, deeply stirring memoir is truly a story for our time: a vivid reminder of why western democracies still beckon to those looking to make a better life.

An accessible picture book that oh-so-simply and graphically introduces the term “refugee” to curious young children to help them better understand the world in which they live.

This novel in verse is a powerful first-person account of Misael Martinez, a Salvadoran boy whose family joins the caravan heading north to the United States. We learn all the different reasons why people feel the need to leave the hope that lies behind their decision, but also the terrible sadness of leaving home. We learn about how far and hard the trip is, but also about the kindness of those along the way. Finally, once the caravan arrives in Tijuana, Misael and those around him are relieved. They think they have arrived at the goal of the trip — to enter the United States. But then tear gas, hateful demonstrations, force and fear descend on these vulnerable people. The border is closed. The book ends with Misael dreaming of El Salvador. This beautiful and timely story is written in simple but poetic verse by Jorge Argueta, the award-winning author of Somos como las nubes / We Are Like the Clouds. Award-winning Mexican illustrator Manuel Monroy illuminates Misael’s journey. An author’s note is included, along with a map showing the caravan’s route.

Two seals are perched on a rock. When others need shelter, do they share it? Room on Our Rock celebrates the truth that there are two sides to every story. This clever picture book has one story that can be read two different ways.

After 9 years in a refugee camp in Nepal, Amita remembers very little of her homeland, Bhutan. At two years old, she was forced to flee her country when her family was targeted because of their Nepalese heritage. When the camp becomes an unsafe place for Amita and her family to live, they make the difficult decision to seek a permanent home in a new country. Interspersed with facts about Bhutan and its people, this narrative tells a story common to many refugees fleeing the country. Readers will learn about the conflict there and how they can help refugees in their communities and around the world who are struggling to find permanent homes.

Although separated by continents and decades, Josef, a Jewish boy livng in 1930s Nazi Germany; Isabel, a Cuban girl trying to escape the riots and unrest plaguing her country in 1994; and Mahmoud, a Syrian boy in 2015 whose homeland is torn apart by violence and destruction, embark on harrowing journeys in search of refuge, discovering shocking connections that tie their stories together.

As North Korea undergoes a devastating famine, Yeong-dae loses both his parents and is forced to beg on the streets. Soon, this young boy sets off on a desperate journey to China to find his sister—his last living family member. Captured by the authorities, he is sent back to the North, where he is thrown in jail and tortured.

Celeste Marconi is a dreamer. She lives peacefully among friends and neighbors and family in the idyllic town of Valparaiso, Chile—until the time comes when even Celeste, with her head in the clouds, can’t deny the political unrest that is sweeping through the country. Warships are spotted in the harbor and schoolmates disappear from class without a word. Celeste doesn’t quite know what is happening, but one thing is clear: no one is safe, not anymore.

When the Turkish army invades northwestern Persia in 1918, nine-year-old Samira and her parents, brother, and baby sister are driven from their tiny village. Taking only what they can carry, they flee into the mountains, but the journey is so difficult that only Samira and her older brother survive. Shunted from one refugee camp to another, from Persia to Iraq and back again, Samira finally ends up in an orphanage, where it seems that she will live out her childhood. Then Susan Shedd, the new orphanage director, arrives and, to Samira’s amazement, announces that she will take all the children back to their villages to make new lives for themselves. With wonder and fear, Samira and three hundred other orphans embark on an epic march of three hundred miles through the mountains towards home. 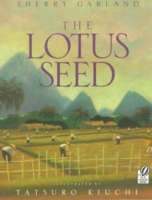 When she is forced to leave Vietnam, a young girl brings a lotus seed with her to America in remembrance of her homeland. “Exquisite artwork fuses with a compelling narrative–a concise endnote places the story effectively within a historical context–to produce a moving and polished offering.”–Publishers Weekly