Forced to take shelter when their Syrian city is plagued with bombings, young Nour and her cousin begin to bravely build a secret underground library. Based on the author’s own life experience and inspired by a true story, Nour’s Secret Library is about the power of books to heal, transport and create safe spaces during difficult times. Illustrations by Romanian artist Vali Mintzi superimpose the colorful world the children construct over black-and-white charcoal depictions of the battered city.

In England, Ruby has no friends because of the speckled blotches on her face that kids say look like dirt. And Kate is sickly all the time, her older siblings each taking turns looking after her. Ruby and Kate’s first meeting is nearly disastrous, but the two lonely girls soon strike up a friendship. Their connection becomes all the more important when England joins the war against Germany and the blitz begins overhead. In Germany, Erik and Hans are best friends filled with plans for their future: Erik taking over their beloved local zoo, and Hans serving pastries right outside the gates. They never expected to be forced to join the national service, training as pilots and tasked with hurting people. And in London a mistreated dog roams the streets looking for handouts, and for a friend. All of these lives will cross in the most surprising ways in this heartrending tale of war and compassion, and hope that can be found in even the most unexpected friendships, brought to life by award-winning author Hilary McKay.

Seventeen-year-old Tolya Korolenko is half Ukrainian, half Polish, and he joined the Soviet Red Army to keep himself alive and fed. When he not-quite-accidentally shoots his unit’s political officer in the street, he’s rescued by a squad of Ukrainian freedom fighters. They might have saved him, but Tolya doesn’t trust them. He especially doesn’t trust Solovey, the squad’s war-scarred young leader, who has plenty of secrets of his own. 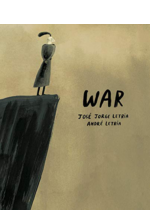 A book with incredible illustrations that show the many sides and effects of war: where it comes from, how it slowly comes to be, and destroys everything in its path.

A Man Called Horse focuses on the little-known life of Horse while also putting into historical perspective the larger story of Native Americans and especially Black Seminoles, helping to connect the missing “dots” in this period. After fighting during the Second Seminole War (1835–1842), one of the longest and most costly Native American conflicts in US history, Horse negotiated terms with the federal government and later became a guide and interpreter. Forced to relocate, he led a group of Black Seminoles to find a new home, first heading westward to Texas and later to Mexico.

For Hasina and her younger brother Araf, the constant threat of Sit Tat, the Myanmar Army, is a way of life in Rakhine province—just uttering the name is enough to send chills down their spines. As Rohingyas, they know that when they hear the wop wop wop of their helicopters there is one thing to do—run, and don’t stop. So when soldiers invade their village one night, and Hasina awakes to her aunt’s fearful voice, followed by smoke, and then a scream, run is what they do.

In 1940, when Simona is eight and her sister, Carolina, is five, their father becomes the cook to the Italian ambassador to Japan, and the family leaves Italy for Tokyo. The girls learn perfect Japanese, make friends, and begin to love life in their new home. But soon Japan is engaged in a world war. In 1943, when all Italians in Japan are confined to internment camps as enemy aliens, Papà and the girls are forced to part, and Simona and Carolina embark on a dramatic journey. Anyone who aids them could be arrested for treason. All the sisters have is each other: their wits, courage, and resilience, and the hope that they will find people who see them not as the enemy, but simply as children trying to survive.

Living a comfortable life in the Space Colonies, Ify, now nineteen and a medical administrator, must return to wartorn Nigeria, where she last saw her sister, to investigate why young refugees from that nation are carrying a deadly virus.

After his home is destroyed by war, eight-year-old Viktor finds hope in the survival of two very special fish.